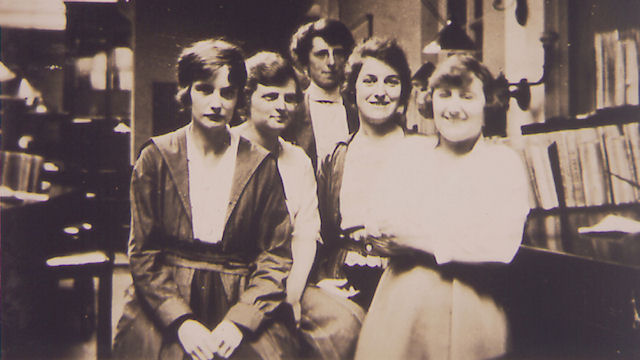 The first woman to run a branch of one of our constituent banks was Fanny Hopkins, who operated Hawkhurst agency of London & County Bank from 1859 until 1905.

In September 1907 London & County Bank recruited three female shorthand typists and a lady superintendent to work at its head office. This was an experiment to find out whether women could successfully take on such roles in place of the existing male typists. The advantage – if the experiment proved a success – was that this would open up a whole new pool of potential employees for the bank, with the added benefit that women would work for lower salaries than men.

There were concerns about opening up the traditionally male-only working environment to women, and so discipline for these first female typists was strict. They were not permitted to talk to male employees on stairs or in passageways. The work was hard and the hours long, but efforts were made to feminise their working conditions; blinds were put up on the windows to their office, and window-boxes were filled with geraniums and marguerites.

Although there were a few scattered examples of banks hiring women in the first years of the 20th century, it was not until the First World War called away so many of the banks’ traditional workforce that ‘lady clerks’ were recruited in significant numbers for the first time.

One of the first British banks to turn to women as a solution to the wartime staffing crisis was Parr’s Bank, beginning as early as 1914, in the first months of the war. Most other British banks followed suit over the next two years.

After the end of the First World War many women who had regarded their bank jobs as simply part of the war effort were pleased to hand their roles back to men returning from the war. Others remained, however; this was a time of expansion in the banking sector, and there were many jobs that needed to be filled. A permanent shift in society had occurred, and banking would never again be a male-only job.

During the 1920s women remained a small minority in banking, but their presence became more formalised. During the war they had, in most cases, been classified as temporary staff, paid a weekly wage rather than a quarterly salary and subject to very short notice periods. Now systems and regulations were developed to manage their permanent presence in the workplace. In most banks, female candidates for jobs had to be between the ages of 17 and 30, and unmarried. Existing female employees had to resign from the bank upon marrying.

The age of the machine

In part, the increasing presence of women in the banking workforce was closely tied to the introduction of machines to daily banking business. Machines improved the overall efficiency of banking operations, but they also changed the nature of the jobs that had to be done by humans. There was a perception that women were better suited to the repetitive tasks that now came to the fore. It was even thought that women’s smaller fingers could more easily work the machines.

As before, the greatest single advantage for banks lay in the lower salaries that women could be paid. In 1931, for example, a man with nine years’ experience working in a London bank branch would have received a salary of around £250 a year. A woman with similar experience was paid only around £170.

The Second World War and its aftermath

Just as in the First World War a generation earlier, the outbreak of war in 1939 prompted a staffing crisis, as thousands of men left their normal occupations to fight for their country. Once again, women were called upon to fill the vacancies left by men in banks, particularly in the less specialised areas. Entry qualifications were relaxed, in recognition of the fact that many women did not have the formal educational background to qualify for jobs that they were, in practice, more than capable of performing.

Although salaries at the beginning of a banking career might be broadly similar for men and women, wages for men increased much more rapidly, fuelled – or at least rationalised – by the assumption that men would marry in their twenties and become responsible for supporting a family, whereas women would be single, and therefore did not need as much money. In 1946 a Royal Commission of Equal Pay was set up to review pay conditions across sectors, but the banks successfully argued that their male and female employees were not undertaking the same duties, and therefore equal pay was not applicable.

Many banks still suffered staff shortages after the end of the war, and several offered their female staff gratuities to keep their jobs. A more influential shift, however, began in 1950, when National Provincial Bank became the first British bank to remove the marriage bar, which had previously forced women to resign from the bank upon marrying. The other banks soon followed suit.

During the 1950s and 60s the banks began to target recruitment literature directly at women, and gradually this literature began to talk in terms of ‘careers’ as well as ‘jobs’. In the same period, the mundane, repetitive duties that had traditionally fallen to female staff were beginning to fall away, as computers undertook more of the drudgery and left more challenging work for the humans – male and female.

Despite these advances, there was still a perception that women could not achieve significant advancement in branch banking, and so many women preferred to build their careers in head office areas, including income tax departments, trustee services, accounts departments and credit clearing.

A few years later and at the other end of the country, The Royal Bank of Scotland's Maisie Muir became a pioneer of another sort, when she took the role of ‘flying banker’ serving bank customers in Orkney. The flying bank was introduced in 1970 as a variation on the bank’s famous mobile banking service, and brought banking facilities to six sub-branches around the islands of Orkney. Maisie remained in charge of the service until her retirement in 1988, making an average of 38 flights a month.

In 1970 the British government passed the Equal Pay Act, legally prohibiting unequal treatment between men and women in terms of pay and conditions of employment. This Act, which came into force in 1975, had a broad remit, covering holidays, pension rights, company benefits and some kinds of bonuses. That Act was followed by the Sex Discrimination Act 1975, which protected men and women from discrimination on the grounds of sex or marital status.

With the passing of these two Acts, women were placed on an equal footing with men and the barriers which had prevented women from advancing in professions such as banking were legally removed. Although there was still much progress to be made, for the first time, equality had become the expectation.