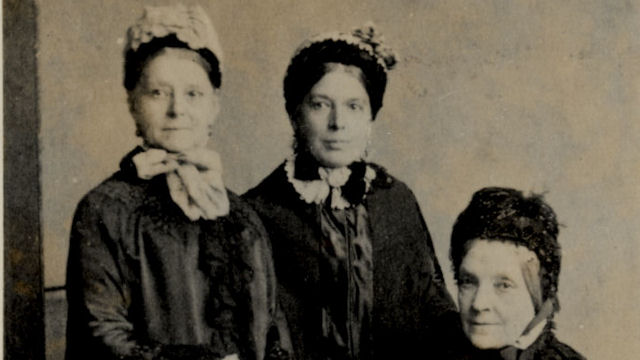 Image: photograph of Fanny Hopkins (centre) in about 1870 with her mother and sister © RBS 2018

Fanny Harriet Hopkins was born in Hawkhurst, Kent, in 1834, the daughter of George Hopkins and his wife Harriet. George Hopkins was a schoolmaster, and also acted as the Hawkhurst agent for the banking partnership Smith, Hilder & Co. The bank agency operated from their family home at Highgate House, Hawkhurst.

In January 1857 George Hopkins died, and in June that year the bank for which he had been agent failed. Despite the bank’s wider problems, the Hawkhurst agency had been profitable, so London & County Banking Co arranged to take it over, providing a clerk to run it but still operating from the Hopkins family home.

In November 1858 the clerk in Hawkhurst resigned. In response, the bank’s directors planned to reduce the agency’s opening hours to three days a week, so that it could be operated by staff from a nearby branch. The proposed reduction was met with hostility by the bank’s customers in Hawkhurst, and so the directors agreed to an alternative solution to the staffing problem; they allowed Fanny Hopkins to take on the agency, thereby allowing it to continue operating on a full-time basis.

Fanny Hopkins ran the Hawkhurst agency from about January 1859. Initially the bank’s staff records referred to her as the ‘assistant at Hawkhurst’. Later she was called ‘clerk-in-charge’, and later still, ‘bank agent’. The manager of nearby Cranbrook branch travelled to Hawkhurst one day a week to conduct customer interviews, but otherwise Miss Hopkins ran the agency alone.

She became a renowned local character. In 1958 the bank’s staff magazine reported a story told by Frank Springett, an elderly Hawkhurst man who remembered Miss Hopkins:

'One morning Mr Springett called at the Bank about 10am to cash a cheque but found the office closed. Eventually Miss Hopkins came to the door in her dressing-gown and apologised for having overslept. She asked Mr Springett to wait at the bottom of the stairs while she ran back to her bedroom. While waiting he heard her pull a box out from under her bed and she proceeded to throw bags of gold and silver down the stairs to Mr Springett with instructions to take them into the banking parlour and put them on the counter ready for her to commence business, which she would do as soon as she had made herself presentable.'

In 1898, when Miss Hopkins reached the normal retirement age of 65, she asked the directors’ permission to remain in post. They agreed that she could continue as long as she was able to do so, and sent a clerk to help her with her duties.

After her retirement Fanny Hopkins moved to London to live with relatives. She died on 22 September 1914 in Shepherd’s Bush, London. The Kent and Sussex Post noted that ‘her death, at the age of 81, will be regretted by all who knew and respected her fine business capacity, and uniform courtesy during the many years she was in the Bank.’