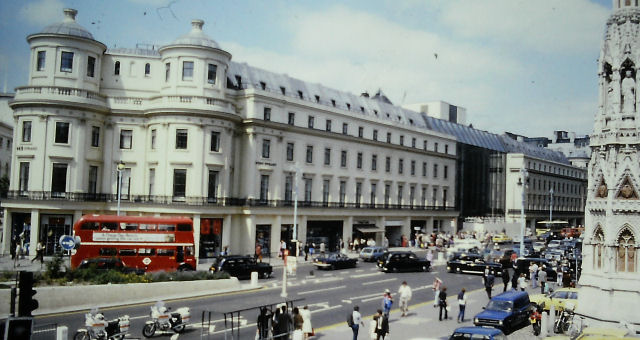 Coutts & Co (1692-date), established in London, is a constituent of The Royal Bank of Scotland Group.

This private bank was founded at the sign of the Three Crowns in London's Strand in 1692 by John Campbell, a Scottish goldsmith. A fellow Scot and able banker, George Middleton, was taken into partnership in 1708 and assumed sole control upon Campbell's death in 1712. Middleton later married Campbell's daughter, Mary, and quickly attracted a large aristocratic clientele. Middleton was forced to stop payment temporarily during the 1720 financial crisis, but subsequently recovered and took into partnership his brother-in-law, George Campbell, in 1727 and his nephew, David Bruce, in 1744. By this time the business was located at 59 Strand and was focused exclusively on banking, having abandoned the original goldsmithing business which had involved the fashioning and sale of gold and silver wares. Middleton died in 1747 and Bruce in 1751, leaving George Campbell as sole proprietor.

In 1755 the business became known as Campbell & Coutts, following the entry into the partnership of James Coutts, the son of an Edinburgh banker, upon his marriage to George Campbell's niece. In 1761, a year after Campbell's death, James took his younger brother, Thomas Coutts, into partnership as James & Thomas Coutts. This partnership continued until 1775 when James retired and the business adopted the title of Thomas Coutts & Co. Thomas soon took in several partners, the best known of whom were Edmund Antrobus, Edward Marjoribanks and Coutts Trotter, but their names were never included in the title of the bank.

Thomas Coutts was an astute banker and well-connected in society. He developed the business, taking over the private banking house of Davison, Noel, Templer, Middleton & Wedgwood in 1816 and attracting many new clients. When Thomas Coutts died in 1822, the bank was renamed Coutts & Co. It was by then unquestionably one of the leading private banks in London and acted as banker to British and foreign royalty as well as to many important personalities from such spheres as politics, theatre, literature and business. In 1840 the accounts and assets of the private bank of Hammersley, Greenwood & Brooksbank were also acquired.

In 1892, following a series of crises in the financial community, the bank converted from a partnership to an unlimited liability company, Coutts & Co. In 1904 the bank moved into new premises designed by MacVicar Anderson at 440 Strand, a site which the bank still occupies today. Ten years later, in 1914, the well-known private bank of Robarts, Lubbock & Co was acquired. Coutts & Co retained this bank's premises in Lombard Street, City of London, as its first branch and also gained Robarts, Lubbock & Co's seat in the London Clearing House.

In 1920 Coutts & Co merged with National Provincial & Union Bank of England, but retained its separate identity as a prestigious private bank with its own board of directors. More London branches were established: Park Lane in 1921, Cavendish Square in 1927, Sloane Street in 1929, Mayfair in 1932, London Wall in 1964, Brompton Road in 1975 and Kensington in 1978. The first branch outside London was opened at Eton in 1961, followed by a branch in Bristol in 1976 and representative offices in Norwich and Winchester in 1978 and 1979.

In 1968 Coutts' owner National Provincial Bank and Westminster Bank agreed to merge to form National Westminster Bank, but Coutts & Co continued to operate independently. During the mid-1970s the bank's premises were reconstructed behind the original Georgian façade, designed by John Nash. During subsequent years 17 further branches were opened, both within and outside London.

Following the acquisition of National Westminster Bank by The Royal Bank of Scotland Group in 2000, Coutts & Co continues to operate independently.

For further information email the Coutts & Co Archives at tracey.earl@coutts.com, or write to: