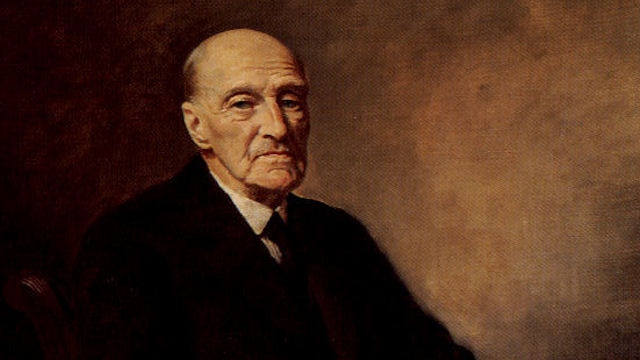 General the Hon. Sir Herbert Alexander Lawrence (1861-1943) was an army officer and banker. He was managing partner, and later chairman, of Glyn, Mills & Co.

Herbert Alexander Lawrence was born on 8 August 1861 at Southgate, London. He was the fourth son of Sir John Laird Mair Lawrence, later first Baron Lawrence (1811-79), British imperial statesman and Viceroy of India, 1864-9, and his wife, Harriette Katherine (1820-1917), daughter of the Reverend Richard Hamilton of Donegal.

Lawrence spent his childhood in England and was educated at Harrow School and the Royal Military College, Sandhurst.

In 1882 Lawrence was commissioned as a lieutenant in the 17th Lancers in India. He returned to England in 1891 and was appointed a regimental adjutant and went through Staff College at Camberley. His first appointment was as staff captain in the Intelligence Division at the War Office. Later, during the South African War (1899-1902), he served on the intelligence staff of Sir John French's cavalry division, rising to the rank of brevet lieutenant colonel in command of the 16th Lancers. In 1903 he resigned his commission and returned to England to embark on a career in banking, having been overlooked as commanding officer of the 17th Lancers in favour of Douglas Haig, then his junior.

Lawrence joined King Edward's Horse (King's Colonials) and commanded the volunteer regiment 1904-9, but otherwise stepped down from military service for a decade. In September 1914, following the outbreak of the First World War, Lawrence was recalled and made general staff officer, grade 1, of the 2nd Yeomanry Division. He went with this unit to Egypt and then to Gallipoli. There, in June 1915, he was given command of the 127th (Manchester) Brigade, part of the 42nd (East Lancashire) Territorial Division. Within eleven months of the outbreak of war, Lawrence had risen from retired major to brigadier-general. He later commanded the 53rd (Welsh) and 52nd (Lowland) Divisions at Gallipoli and proved an able officer. After Gallipoli he returned to Egypt, where in the summer of 1916 he achieved a conspicuous success by defeating a German-Turkish force at Romani, a victory which returned the Sinai Desert to British control.

Opposed to the plan to invade Palestine, Lawrence fell from favour and was sent to the 71st Home Forces Division in England. He returned to the command of a fighting unit in February 1917 when he was given a second-line territorial division, the 66th (2nd East Lancashire). The 66th Division fought on the Western Front at Ypres in October 1917. During the winter of 1917-8 Field Marshal Haig's command underwent major change. In January 1918, in a surprising appointment, Lawrence replaced Brigadier-General John Charteris as chief intelligence officer. Soon afterwards, at the end of January, he was promoted to the more important post of chief of the general staff, in succession to Sir Lancelot Kiggell. He retained this post throughout 1918 and retired with the rank of general in 1919.

After leaving the 17th Lancers in 1903, Lawrence worked in the City of London as a director of various companies, including Ottoman Bank. In 1907 he became a partner in Glyn, Mills, Currie & Co, the bank in which his father-in-law was senior partner. Lawrence’s banking career was interrupted by the First World War, but he returned to the bank in 1919 as managing partner.

With Lawrence at its head, the bank acquired Holt & Co, banker to the army, navy and air force, in 1923 and Child & Co in 1924. Glyn, Mills & Co became Britain’s largest private bank, with a magnificent new head office in Lombard Street, opened in 1933. In 1934 Lawrence became chairman of Glyn, Mills & Co.

By 1939 Lawrence could see that another war was imminent. Fearing the effect of death duties on the bank if the younger partners were killed, he arranged to sell Glyn, Mills to The Royal Bank of Scotland. He remained the bank’s chairman and managing partner after the sale.

Other business connections and interests

Lawrence was recognised as a senior figure in the City of London and, although unassuming, had a reputation for sound financial judgement and wide-ranging business knowledge. His other chairmanships included:

Lawrence was appointed as a member of the Royal Commission on the Coal Industry in 1925, a trustee of the Imperial War Graves Commission in 1926 and a governor of Wellington College.

On 26 April 1892 Lawrence married Isabel Mary (d.1941), daughter of Charles William Mills, second Baron Hillingdon. They had two sons, Oliver John and Michael Charles, and one daughter. Both sons were killed in action on the Western Front during the First World War.

General the Hon. Sir Herbert Alexander Lawrence died on 17 January 1943 at Woodcock, Little Berkhamsted, Hertfordshire. He was buried at Seal, near Sevenoaks in Kent. The lesson at his memorial service was read by his long-time friend the Right Honourable Montagu Norman, governor of the Bank of England.