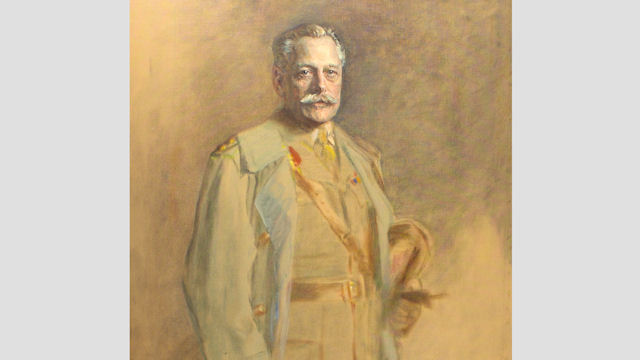 Image: posthumous portrait of Field Marshall Haig by Sir James Guthrie, commissioned in 1929 and unfinished when the artist died in 1930 © RBS 2018

Douglas Haig was born in Edinburgh on 19 June 1861, the 5th son of John Haig, a whisky distiller from Fife, and his wife Rachael. He was one of 11 children. He was educated at Orwell House, near Edinburgh, and in Warwickshire, before attending Clifton College in 1875. He went up to Brasenose College, Oxford in 1880.

Douglas Haig joined the army in 1884, undertaking officer training at Sandhurst before being posted to India. He rose rapidly through the ranks in the 1880s and 1890s, serving with Kitchener in Sudan and Major-General French in the Boer War. His own appointment as a Major-General under Kitchener in India in the early 20th century made him the youngest officer of his rank in either the British or the Indian army.

In 1905 Haig returned to London, first as director of military training, and later as director of staff duties. In both positions he played a key role in British preparations for a European war, particularly through his work with the British Expeditionary and Territorial forces. He was also responsible for forming the Imperial General Staff, providing British-style military training in Britain’s self-governing colonies.

He served again in India between 1909 and 1911. In 1909 he was created Knight Commander of the Royal Victorian Order (KCVO), and the following year was promoted to Lieutenant-General.

He returned to Britain in 1911 as commander of the military facility at Aldershot. He was still in this post at the outbreak of the First World War on 4 August 1914.

Haig left Britain with the British Expeditionary Force (BEF) on 15 August 1914, and was heavily involved in the first conflicts in France and Belgium. At the end of 1914 the BEF was restructured to create two armies, and Haig (now promoted to General) became commander of the First Army. Thereafter his role became primarily strategic, with less direct involvement in front-line battles. His critics – both at the time and increasingly in more recent years – have accused him of not knowing, or perhaps not caring, about the terrible suffering endured by the men who served under him.

In 1915 he became commander-in-chief of the British Expeditionary Force. By the outbreak of the Somme offensive in July 1916 he was in command of five armies totalling 1.5 million men.

On 12 April 1918 he gave the now infamous order to his First and Second Armies: ‘Every position must be held to the last man: there must be no retirement. With our backs to the wall and believing in the justice of our cause, each one of us must fight to the end.’ The order sparked the beginning of the final stage of the war, as the subsequent offensives saw enemy forces begin their retreat. When the German army finally capitulated on 11 November 1918, Douglas Haig led his forces to the Rhine.

After the First World War

In 1919 Douglas Haig was appointed Field-Marshal Commander-in-Chief of the Forces. He was also granted an Earldom, becoming 1st Earl of Bemersyde.

In the years after the First World War Haig dedicated himself to the welfare of ex-servicemen, many of whom faced terrible hardship in their attempts to return to civilian life. He was a founding supporter and president of the British Legion, and of the British Legion Scotland, both established in 1921. He was also chairman of the United Services Fund.

Also in 1921, he established a charity, the Earl Haig Fund, to raise money to support ex-servicemen. The charity’s greatest fundraising activity was through the sale of remembrance poppies on Armistice Day each year. It initially obtained its supplies of poppies from the factory in Richmond, Surrey, where they were made by wounded ex-servicemen. In 1926, however, Earl Haig’s wife Lady Haig established a separate poppy factory for Scotland in Edinburgh. Lady Haig’s Poppy Factory still operates today.

On 10 February 1923 Douglas Haig unveiled the Royal Bank of Scotland's memorial to members of its staff who had lost their lives in the First World War. In his speech, he identified the memorial not only as a reminder to the living of those who had died, but as ‘a record and example of civic duty in its widest and completest sense.’ He described the contribution made by the dead as a continuation of the ‘duty of citizenship’ they had fulfilled in their earlier civilian lives as bankers, and reminded his audience that the task was not yet finished; normal life still needed to be rebuilt, and ex-servicemen supported.

Soon afterwards, in April 1923, Haig became a director of the Royal Bank of Scotland, as successor to the recently deceased Charles Carlow. He attended board meetings regularly for the rest of his life, right up to 27 January 1928, only three days before his sudden death.

During the summer of 1905 Douglas Haig returned to Britain on leave from India. At a reception hosted by the King he met the Honourable Dorothy Maud Vivian, daughter of Hussey Crespigny Vivian, 3rd Baron Vivian. He proposed marriage to her two days later, and they married in the private chapel of Buckingham Palace on 11 July 1905. They had four children together.

Douglas Haig died suddenly from heart failure on 29 January 1928. Following a state funeral at Westminster Abbey, he was buried at Dryburgh Abbey, near his home at Bemersyde, on 7 February 1928. Reflecting on his years of service to the bank, The Royal Bank of Scotland’s directors remarked that ‘his personal qualities endeared him to his brother directors, the officials and the staff. To all alike his death is an irreparable loss.’