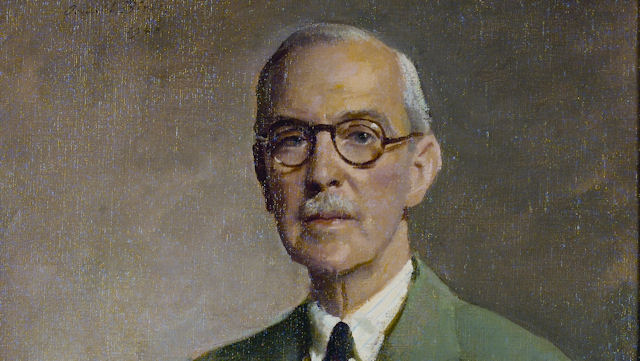 Eric Gore Browne was born on 2 October 1885, the son of Spencer Gore Browne of Rowledge, Surrey. He was educated at Malvern College and Worcester College, Oxford. He was called to the bar at Inner Temple, London, in 1909.

In 1912 Gore Browne joined the Post Office Rifles, a part-time volunteer battalion which was part of the London Regiment.

During the First World War Gore Browne was called to active duty, arriving in France with his battalion on 13 March 1915. He served throughout the war in various staff posts, and rose to the rank of brevet major. He was mentioned in despatches and won the French Croix de Guerre and the Distinguished Service Order.

From 1942 to 1943 he served as Controller of Rubber, a government post introduced in 1941 to ensure good management of the nation’s precious rubber resources, which were vital to the war effort.

In May 1919, after being demobilised from full-time army service, Gore Browne joined the merchant bank Glyn, Mills & Co as its secretary. His business acumen and astute judgement led to his appointment as a partner of the bank at the end of 1922. In 1939 Glyn, Mills was acquired by the Royal Bank of Scotland, and as part of the consequent reorganisation of Glyn, Mills’ business, Gore Browne’s title became managing director and deputy chairman. He became chairman of Glyn, Mills and an extraordinary director of the Royal Bank of Scotland in February 1943.

At the end of March 1944 Gore Browne was appointed chairman of Southern Railway, and in order to concentrate his efforts on that post, he gave up the chairmanship of Glyn, Mills, although he remained an active director for the rest of his life.

In 1933 Gore Browne published The History of the House of Glyn, Mills & Co, a privately published history of the bank, including its constituent businesses and their owning partners.

In 1962, looking back on his life, he reflected, ‘such success as I have had in life is all due to the House of Glyn. If they had not taken me on and helped me all my life, I should never have had all the good fortune which has come my way.’

He was vice president and later president of the Bank Clerks’ Orphans Fund from 1943 until his death.

Gore Browne held various other directorships and business roles, including:

A prominent churchman, Gore Browne’s service to the Church of England included appointment by the archbishops to the central Board of Finance, one of its two main financial bodies, in 1951. He was chairman of the board, 1953-60. His contribution to the growth of the Christian Stewardship movement and the effective investment of church funds in business was considerable and his work put church finances on a much better footing.

He was appointed High Sheriff of Rutland in 1957.

From about 1934 the family lived at Glaston House, Uppingham, Rutland.

Colonel Sir Eric Gore Browne suffered declining health from 1962, and was forced to give up many of his business interests. He died on 28 May 1964 in Middlesex Hospital.