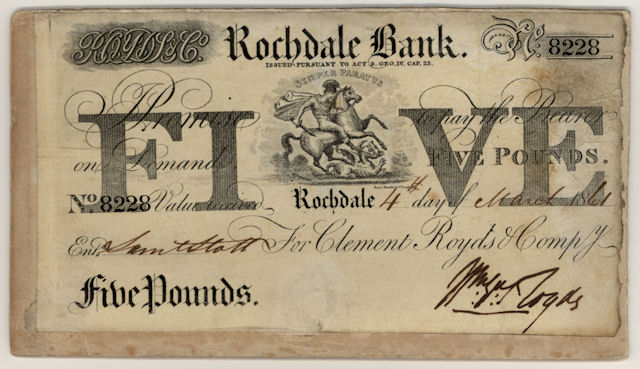 Clement Royds & Co (1819-81), established in Rochdale, was a past constituent of The Royal Bank of Scotland.

This private country bank was established in 1819 as a branch office of John Rawson, William Rawson and Christopher Rawson & Co (est. 1811), bankers of Halifax, who had offered a weekly banking service in Yorkshire Street, Rochdale, on market day since 1818. The new bank, trading as John Rawson, William Rawson & Christopher Rawson, was located in The Butts and issued its own notes from the outset. Its London agent was Jones, Loyd & Co, bankers of London. It also came to be known as Rochdale Old Bank.

In 1827 the bank was acquired by Clement Royds, local woollen merchant, trading initially as Royds, Smith & Co and by late 1828 as Clement Royds & Co. Royds died in 1854 and was succeeded as senior partner by his son, William Royds. In 1881, after the failure of local bankers J & J Fenton & Sons (est. 1819), Clement Molyneux Royds, Clement Royds’ grandson and senior partner since 1871, believing the prospects of small private banks to be bleak, sold the business to Manchester & Salford Bank (est. 1836), bankers of Manchester, for £43,000.

Our archival records of Clement Royds & Co have the reference code CR.