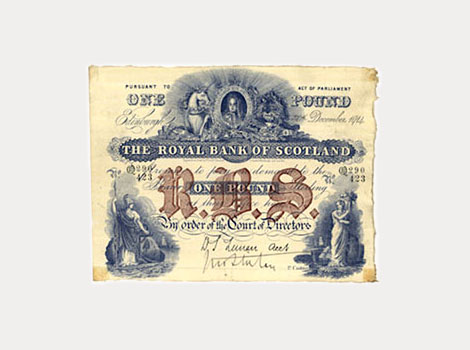 This is an example of The Royal Bank of Scotland's longest-used £1 note design.

Apart from minor alterations, this essential design remained in use from 1832 until 1968.

The design features a portrait of George I, the King who had granted permission for the bank's formation in 1727. The portrait is flanked by the unicorn and lion of the Royal Arms. In the bottom left and right corners are allegorical representations of Britannia, looking out over the seas, and Plenty, holding a cornucopia.

It was initially printed entirely in black but, as photography became more sophisticated in the mid-nineteenth century, colour became a more important anti-counterfeit measure. From 1860, the note was printed in the colours seen here: bright blue, with the initials RBS added in red in the centre of the note.

The £1 note continued to be hand-signed until 1936, by which time it was the last Scottish £1 with an unprinted signature. In fact, it was many years since the notes had been signed by the cashier or accountant in person.

As the circulation had grown, this increasingly onerous task had been passed to more junior staff, signing on behalf of their superiors. By the 1930s, however, technological advances had made the signature much less important.

During the 1940s, the larger denominations also ceased to be signed by hand. The last hand-signed Royal Bank note was the £100, signed by hand until 1949.

In 1927 all the Scottish banks agreed to reduce the size of their notes, in line with the Bank of England's own issues. This was the beginning of a process that led to all British banknotes, regardless of the issuing bank, having certain characteristics in common.