One guinea note of The Royal Bank of Scotland, 1792 | RBS Heritage Hub

One guinea note of The Royal Bank of Scotland, 1792 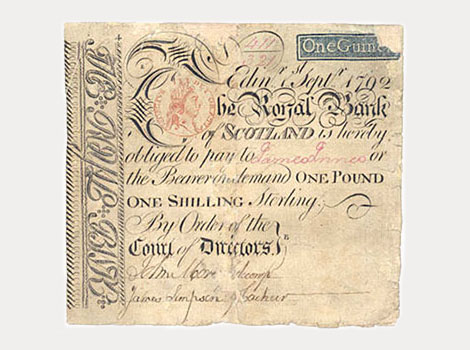 This one guinea note of The Royal Bank of Scotland, 1792, is known as the 'red head issue'.

It's an example of Europe's first multi-coloured banknote design, first issued by The Royal Bank of Scotland in 1777. It is mostly printed in black, like all previous notes, but it has a rectangular panel giving the note's value in blue in the top right corner, and the King's head is printed in red. Printing these notes was a laborious process. Each colour had to be printed separately, with the moistened paper being left to dry between printings.

A guinea was originally a gold coin, initially worth £1 but later fixed at the slightly higher value of £1 1s. Coins were always scarce in Scotland, particularly valuable gold coins like the guinea. No doubt it was this shortage that prompted the Royal Bank to issue a guinea note; it was the first Scottish bank to do so. In recognition of the denomination's origin as a coin, the royal portrait on the note - by this time, the King was George III - is exactly in the style of a guinea coin.

As well as looking impressive, the bank hoped that the three colours would make the note harder to copy. Counterfeits did, however, appear; in fact, it is possible that this particular example is itself a counterfeit. The great effort involved in producing the notes did not therefore prove worthwhile. The experiment was not extended to other denominations, and rival banks did not imitate it.

A new design in 1799 reverted to black ink, and colour did not return to banknotes until advances in photography in the mid-19th century made it more important as an anti-copying measure.