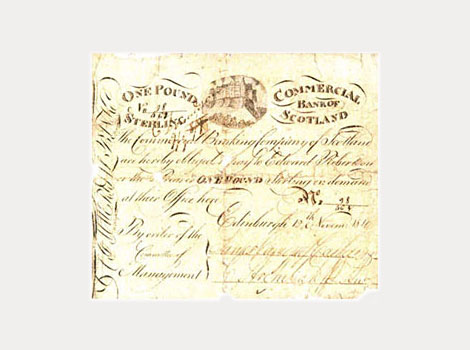 In 1810, a brand new bank was established in Scotland, intended to cater specifically for the financial needs of farmers, merchants and other business customers.

As a new bank, its notes were particularly vulnerable to counterfeiting, because people had not seen the notes before so had no information to help them distinguish a real note from a fake. This forgery is one of a number that have survived, but no genuine examples of Commercial Bank's first issue are known to exist.

The vignette on the note is a view of Edinburgh Castle. At that time, the castle was used to hold French prisoners of war, and it is thought that some of the most effective note forgers of the period were among these prisoners, with gaolers acting as their accomplices to provide equipment and put the notes into circulation. It is therefore possible that the man who created this vignette was imprisoned behind the very walls he drew.

The bank also found that security on its genuine unissued notes was not good enough. There were instances of notes which had been legitimately printed getting into circulation with counterfeit signatures. Just a year after its formation, the situation got so bad that Commercial Bank of Scotland had to go to the expense of starting again with its banknotes.

It had new printing plates engraved, and brought printing of the notes into its own premises, where it could keep closer control of security.