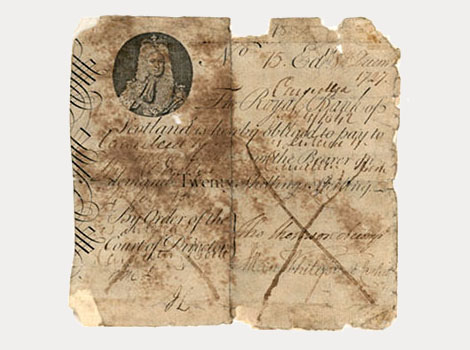 This note is from The Royal Bank of Scotland's very first set of banknotes, printed in 1727.

Its vignette depicts King George II, who had come to the throne earlier that year. This was the first British banknote to include a royal portrait. A portrait was a difficult and expensive feature to produce, but was an excellent anti-counterfeiting measure. People are so attuned to distinguishing between faces that a misplaced line in a portrait stands out where a similar error elsewhere might go unnoticed.

The first notes were dated 8 December 1727. They were printed in the bank's head office just off Edinburgh's Royal Mile on a taille douce, a rolling press invented in the 1540s. This press forced dampened paper into inked lines engraved in copper plates. It was operated by turning two metal bars, and the strenuous work was made even more uncomfortable by the proximity of the furnace which heated the plates so that the ink would remain fluid. About 1,200 to 1,400 notes could be printed in a day.

After printing, each note was hand-singed by the bank's accountant and cashier, and given a unique number. Also added by hand was the value in old Scots currency - that is, £12 Scots on a 20 shilling note. Scots currency had not officially existed since the Union between England and Scotland in 1707, but the custom of referring to Scots pounds continued. The Royal Bank of Scotland tried removing this detail in 1729, but found that it hindered the notes' acceptance. It was reintroduced five years later, and remained on the 20 shilling notes until 1792.

Completed notes were bound into bundles similar to modern cheque books. Each note's unique number was written on the counterfoil as well as the note itself. At the time of issue, notes were cut out of the book in a wavy line so that when presented for payment, the clerk could check them against the counterfoil, ensuring that the cut lines matched and the note was genuine.