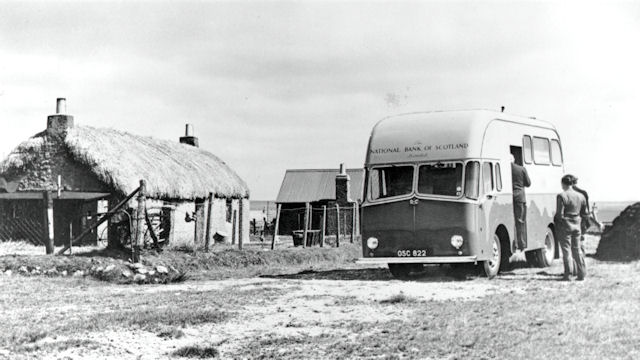 The Royal Bank of Scotland has a pioneering history in mobile banking.

Our first mobile bank was introduced by National Bank of Scotland in November 1946. This bank had an extensive network of branches spread over a wide geographical area. One operational problem it faced was how to provide banking facilities in remote areas, where the population was too scattered to warrant the establishment of a sub-office. Towards the end of 1946 the idea of introducing a ‘Travelling Bank’ on the Isle of Lewis was suggested to serve, in particular, the island’s crofter-weavers, who would previously have had to take significant time off work to visit the bank in Stornoway, the island’s biggest town. The new mobile bank, based at Stornoway branch under the charge of the local agent Donald McIver, went into service on Tuesday 5 November 1946. It was on the road for 9 days a fortnight and travelled, on average, 50 miles a day.

The origins of the idea probably date from the Second World War, when army field cash offices administered payment and receipt of money to and from military units and individual soldiers. The United States army operated some of its pay offices from vans, and it was one of these vehicles, a Studebaker van serving US military personnel posted in Scotland, that the bank bought after the end of the war to convert into a bank on wheels.

The new service immediately prompted comment in the media, including:

The success of the Stornoway-based service led National Bank of Scotland to launch a second mobile banking service, based in the Fort William area, in November 1947. Encouraged by National Bank’s success, several other Scottish banks subsequently introduced their own services. The idea also spread to England and beyond. National Bank of Scotland received enquiries from banks in Africa, Europe, India, Israel, New Zealand and the United States of America, all eager to investigate the possibilities of starting their own services.

In 1953 The Royal Bank of Scotland itself introduced a mobile bank, based in a caravan unit of the type that its English constituent Williams Deacon’s Bank had successfully used to provide temporary services at agricultural shows. The vehicle comprised a main office and a manager’s room and, on its regular itinerary, called at 26 places as far apart as Newcastle upon Tyne and Inverness.

Meanwhile, in 1949, National Bank of Scotland had replaced the original Studebaker van with custom-built vehicles using an Austin chassis. These were in turn replaced by Albion diesels in 1956. The Albion had been chosen because it was a heavier, more powerful vehicle than the Austin and was therefore thought to be better suited to the range of terrain it would face, although according to the Stornoway vehicle’s driver, it was a ‘big, clumsy thing’. This new mobile bank sported a livery of silver grey and St Andrew’s blue and was decorated on either side with the bank’s coat of arms.

In 1962 National Commercial Bank of Scotland adapted the mobile bank concept to another of the most remote regions in which it operated; the islands of Orkney. It introduced a boat-based mobile bank, known as Otter Bank, based at Kirkwall branch on the Orkney mainland and providing banking services for communities on the smaller islands.

In Orkney, Otter Bank sailed for the last time in 1970, being replaced by a flying service which was less bound by tides and weather conditions.

During the 1970s customised Ford Transit vans replaced the Bedford vans which had been used as mobile units since the mid-1960s. Meanwhile, in September 1976, the very first official driver of the mobile bank, Kenny Smith, retired after nearly 30 accident-free years of driving the Stornoway vehicle. The mobile bank service continued to develop, with some 14 regular routes in operation. By 1982 the Royal Bank had also extended its service outside of Scotland, through its Williams & Glyn’s subsidiary, with the establishment of a mobile bank on Jersey in the Channel Islands. During the same period, Ulster Bank, later to become part of the RBS family of banks, also introduced its first mobile banking facilities in Ireland.

On 24 June 1974 National Westminster Bank (later to become part of the RBS family of banks) launched its first mobile banking service, operating under the direction of the manager of Bedford High Street branch. Originally launched as an experiment, the service operated a regular timetable and visited 14 locations within a 20-mile radius of the parent branch.

In April 1975 a second NatWest mobile bank was launched, under the auspices of the bank’s 'Alternative Types of Representation' project, which had been set up to analyse the need for branches, sub-branches and mobile services in communities. The new service visited 14 locations around Trowbridge in Wiltshire.

In 1977 NatWest decided that it would not begin any additional mobile bank services, but it maintained its existing two until the Trowbridge vehicle ceased operation in the late 1980s. The Bedford-based service ended in 1995.

In 2000, however, NatWest was acquired by The Royal Bank of Scotland. Now part of a banking group with a longer and stronger tradition of mobile banks, NatWest began to re-introduce mobile banking services in rural parts of England and Wales.

Information about the present-day mobile banking services of The Royal Bank of Scotland, NatWest and Ulster Bank can be found at: