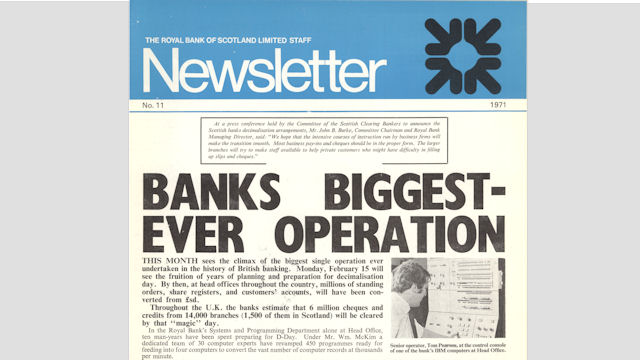 The United Kingdom's currency was decimalised in 1971. Preparing for this major change was a challenging task for all banks.

Before decimalisation in 1971, the UK sterling currency was divided into pounds, shillings and pence (£:s:d). One pound was made up of 240 pence, with 12 pence to the shilling and 20 shillings to the pound. Money calculations could be complicated, and the cumulative effect of inflation meant that the penny had become so low-value as to be limited in its usefulness as a unit of currency.

Parts of the English-speaking world such as Canada and the United States had long operated decimal currencies, and by the beginning of the 1960s other countries including South Africa, Australia and New Zealand had firm plans to decimalise. In 1960 the British Association for the Advancement of Science and the Association of British Chambers of Commerce co-published a report recommending that Britain do the same.

In response, the British government set up the Committee of Inquiry on Decimal Currency (also known as the Halsbury Committee) in 1961. The committee reported in 1963; its recommendations were adopted in 1966; and Parliament formally gave the plan its support with the passage of the Decimal Currency Act in May 1969.

The run-up to D-Day

The date for decimalisation was fixed at 15 February 1971, and quickly came to be widely known as ‘D-Day’. February had been chosen because it was assessed to be the quietest time of the year for banks, shops and transport organisations. It was hoped that the anticipated upheaval of the changeover would thus be more manageable.

Under the decimalised system, the pound was to be retained, but would now be divided into 100 ‘new pence’, denoted by the symbol p. New coinage was issued alongside the old coins. 5p and 10p were the first to appear, introduced in April 1968. They were the same size, composition and value as the old shilling and florin (2 shilling) coins, and circulated interchangeably with them. In October 1969 a 50p coin was introduced, and as D-Day approached, the old halfpenny, half-crown, and 10 shilling notes were withdrawn from circulation.

A major publicity campaign ran in the weeks before D-Day, preparing the British public for the coming change. The BBC broadcast a series of five-minute programmes, Decimal Five, and ITV showed a short drama called Granny Gets The Point, where an elderly woman is taught to use the new system by her grandson. A number of topical records appeared marking the occasion, from Wilfred Brambell’s Decimal Song to Max Bygraves’ Decimalisation, which featured the lyric ‘They’ve made it easy for every citizen / ‘Cos all we have to do is count from one to ten!’

Meanwhile, behind the scenes there was an enormous amount of work to be done if decimalisation was to happen smoothly. A great deal of the responsibility fell upon banks. To enable them to change their cash, bookkeeping, machines and systems, they closed at 3.30pm on Wednesday 10 February 1971 and did not open again until 10am on D-Day, Monday 15 February 1971.

The Royal Bank of Scotland's preparations

The Royal Bank of Scotland's staff newsletter described decimalisation as ‘the biggest single operation ever undertaken in the history of British banking’.

The bank was helped in its preparations for decimalisation by the relatively advanced state of its computerisation programme. By 1971, it was well on the way to becoming Scotland’s first bank to have its entire branch network linked to central computers. These computers were able to undertake much of the branch-level work in the run-up to decimalisation, saving an estimated 6,300 branch staff from two weeks of intensive overtime. This benefit far outweighed the 10 years’ worth of staff time that the bank’s Systems & Programming team estimated they spent preparing the computers.

Staff had to be trained to understand the new currency, and to be as confident with it as they had come to feel in years – or even decades – of processing the old currency. To help with this task, the British Bankers' Association had issued a series of booklets and exercises, plus a quick-reference cribsheet for cashiers.

Three new coins were to go into circulation on D-Day – halfpenny, one penny and twopenny pieces. The Royal Bank of Scotland’s branches alone were issued with £1.75m of these new coins in advance of D-Day, weighing a total of 625 tons. The coins had to be sent out securely from the Royal Mint in South Wales to the bank’s offices all over Scotland – itself a logistical challenge.

Despite all the preparations, there were some operations that could not be undertaken until the right moment, during the changeover itself. Despite three years’ careful planning, that was the experience for the staff of Clearing department. The Scottish banks jointly undertook a ‘Special Clearing Operation’, working through the night to ensure that all payments were processed on time, and did not get mixed up between old and new systems. To keep their strength up, the head office canteen also stayed open all night to provide on-the-spot sustenance.

NatWest faced special challenges. It didn't even exist as a single bank when planning began. It was only in 1968 that Westminster Bank and National Provincial Bank announced plans to merge, along with National Provincial’s subsidiary District Bank. For these banks, the late 1960s were a time of planning and building a whole new bank, ready for launch on 1 January 1970. Decimalisation thus came at a time when much other work was also underway. The legacy systems of three different banks had to be taken into account when preparing for the changeover.

In November 1968 NatWest created a dedicated Decimal Currency Office to handle internal planning and external liaison for decimalisation. This team planned what value of the new coins to send to each branch in preparation for D-Day from a bank-wide total of 740m coins, worth £9.5m. They also checked all the bank’s machines and equipment to ensure compatibility with decimal currency, and worked with 41 Decimal Currency Liaison Officers across the bank, each of whom took responsibility for addressing decimalisation-related challenges in their business area.

3,500 members of staff from NatWest branches attended a 2½ day training course at the bank’s London Training Centre in October and November 1970. A monthly Decimal Currency Digest was circulated to staff, and three programmed learning booklets were issued: Brush up your Decimals, Expressions of Amounts and Conversion of Amounts. Cashiers also had to study a further booklet, Decimalisation and the Cashier, and complete six practical training exercises.

NatWest staff also played a part in preparing the public for decimalisation. By June 1970, more than six months before D-Day, staff from the bank had delivered over 3,000 decimalisation talks to public groups ranging from Women’s Institutes to Round Table groups. Booklets and leaflets were also issued to customers in the run up to D-Day.

To enable bank staff to undertake all the necessary preparations, all banks were closed for business on Thursday 11 and Friday 12 February 1971. They would in any case have been closed all weekend, so their next day of trading was Monday 15 February; D-Day itself.

The closure of banks was potentially inconvenient for customers. Fortunately cash dispensers – a relatively new innovation at the time – were unaffected by the change, since they only dealt in banknotes, and were therefore able to continue in operation over the closed period. It was also agreed that bank branches inside airport terminals and ferry ports could remain open, but staff had to check that only genuine travellers were served.

For some business customers, there would have been security concerns attached to having to keep several days’ worth of cash takings on their premises, so night safe facilities remained open as usual, and special arrangements were made for accommodating limited transactions at selected branches on the closed days, between 11am and noon only.

By the week before D-Day, it was clear that most preparations had been made well, and Lord Fiske, chairman of the Decimal Currency Board, felt confident enough to predict that D-Day would be ‘the non-event of 1971’.

He was right; after years of intensive preparation, D-Day itself went smoothly. The next day, The Times declared ‘Britain swings cheerfully into new era of decimal currency’. NatWest’s internal review of D-Day and its preparations noted a feeling of anti-climax among staff, who had put so much effort into getting everything ready. The staff in the bank’s computer department did allow themselves a little self-congratulation, though, calling it ‘a job pretty well done.’

The remaining old currency in circulation was gradually withdrawn in the months and years after D-Day. The last in circulation was the florin, which continued to be used alongside the 10p coin until 1992 when a smaller 10p piece was introduced.