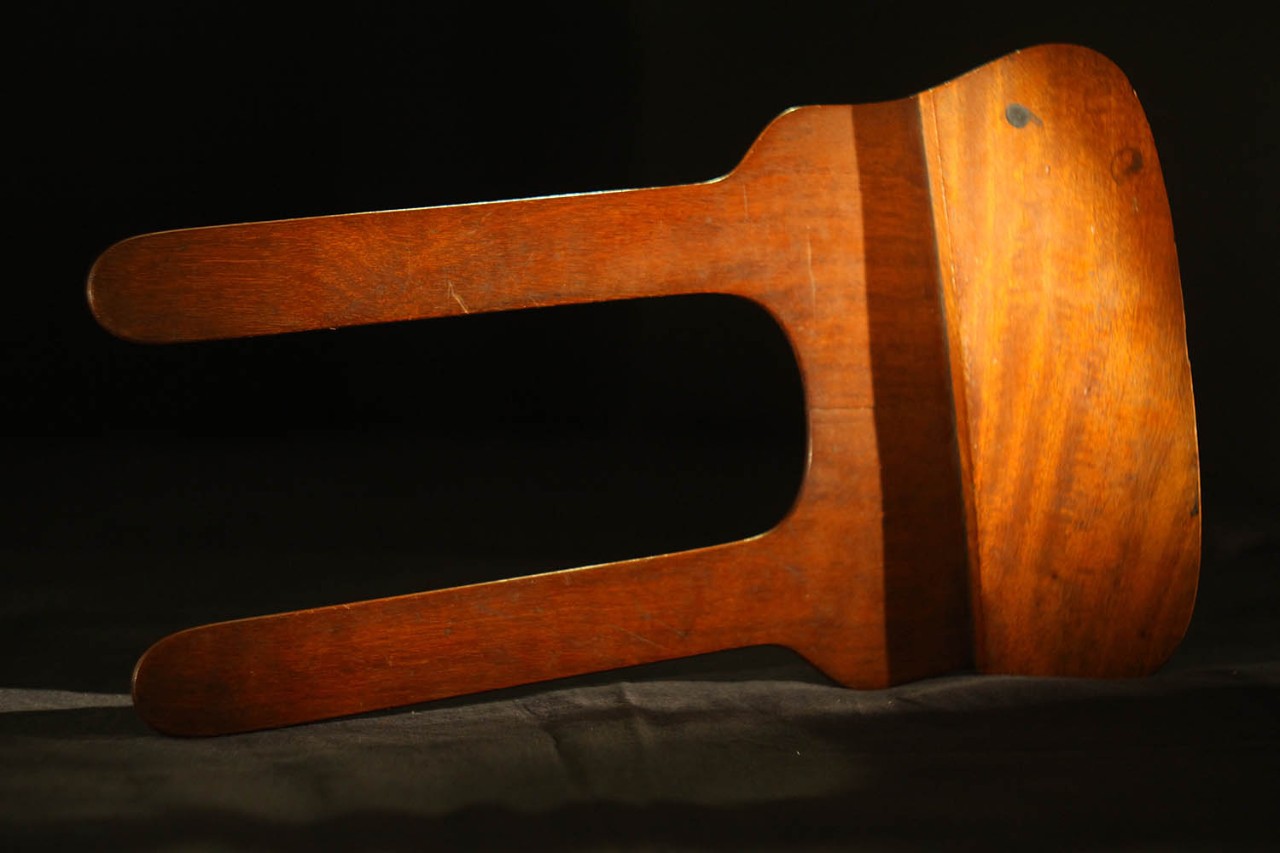 This ingenious piece of equipment was designed to ease the long hours bank clerks spent writing in ledgers. It's an armrest, created to allow its user to make ledger entries without putting undue strain on his writing arm.

Some Victorian bank ledgers were big. Really big. They might measure 50x40x20cm or more, and weigh over 40lb. Clerks were responsible for writing in them clearly and accurately using a quill, which was much harder to use than a modern pen. Clerks worked at high, sloping desks, either standing or perched on tall stools. Their hours were long, and office conditions were often dingy, with poor natural light supplemented by gas lamps. Good, reliable records were fundamental to any bank's success, but creating them was no easy task.

The armrest worked very simply. Its prongs were inserted between pages of a large volume, some way back from the page in use. The weight of the pages held the armrest firmly in place, creating a small ledge sticking out from the side of the book. The clerk could rest his forearm there as he wrote, instead of keeping it in mid-air, where his muscles would soon grow painfully tired.

| Writing lay at the heart of the Victorian bank clerk's duties

Writing lay at the heart of the Victorian bank clerk's duties. Today, many people are so used to typing that they cannot write by hand for more than a few minutes without developing pains, but the Victorian bank clerk would have spent hours at a time writing, day after day. One of the most essential qualifications for his job was his ability to write clearly and accurately. He would have been required to supply a sample of his handwriting as part of his job application. Few people today would make the grade in such a test, but in the Victorian era good handwriting was a valuable job skill, and was given significant attention in schools.

The result of the great expertise and care that so many Victorian clerks put into their work is that today, historians often find surviving records from 150 years ago easier to read and use than those from just 50, or even 5, years ago. Few of those clerks from long ago can have imagined that the products of their daily work would survive so long, or be so treasured today for the glimpses they give us of our vanished past.