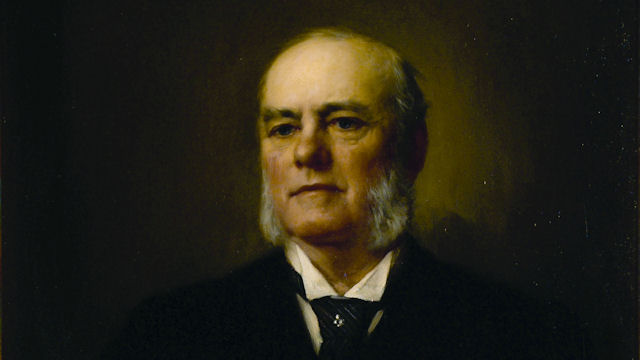 Henry Francis Slattery was born on 3 January 1833 at Carrickbeg, County Waterford, Ireland. He was the second son of a woollen clothier named Peirse Slattery and his wife Mary Anne Cutler. He was probably educated at a private school in Carrick and afterwards appears to have entered the hide trade in Waterford as a junior in the firm of family friend John Lawler.

Little is known of Slattery’s early business activities in Waterford, but by the 1860s he had become a respected businessman of some wealth.

One of his most important business involvements was with National Bank of Ireland. Slattery’s connection to the bank seems to have arisen through a shareholding which his wife had inherited from her deceased first husband. In 1868 Slattery was one of a number of Irish shareholders chosen to make representations to the bank’s board. In 1869-74 he served as the bank’s shareholder auditor, despite having no professional qualification in the field. He joined the bank’s board in 1874 and became deputy chairman in 1882.

In 1888, thanks to a high profile election campaign run by the bank’s Irish shareholders, Slattery was appointed chairman of The National Bank over rival candidate Hugh Childers, previously Gladstone’s Chancellor of the Exchequer and Home Secretary. Slattery remained chairman of the bank for 23 years, until his death in 1911. During his term the bank’s deposit and current accounts increased from £10m to £13.5m, and the number of its branches grew by 50% to 146. Slattery was vice president of the Institute of Bankers in Ireland at the time of his death.

Slattery served as a councillor for Waterford’s west ward 1864-74 and by 1867 was involved with the town’s Harbour Commission. He was appointed mayor of Waterford in 1871 and in that post was responsible for initiating the improvement of the town’s water supply. In 1894 he sat on the Government’s Financial Relations Commission, chaired by Hugh Childers, to enquire into the relative prosperity of England and Ireland.

On 15 May 1864 Henry Francis Slattery married Eleanor, widow of Laurence Forristal, a well-to-do general merchant in Waterford. The couple lived in the Forristals’ former residence on Mount Misery, Waterford. Eleanor died abroad in the early 1870s.

Slattery was remarried on 4 August 1893, to Agnes (1860-1947), daughter of Francis Cuddon, a London solicitor. They lived initially in Notting Hill, London, and later in Chislehurst and Marlow. They had several children:

Henry Francis Slattery suffered from poor health in his later years. He died at home in Marlow on 13 May 1911, aged 78. He was buried in Kensal Green, London.