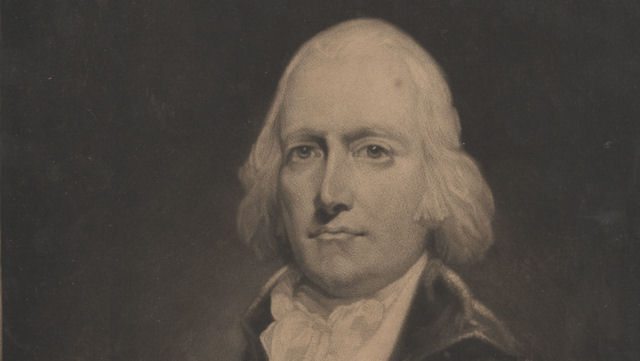 Image: mezzotint based on a portrait of George Wheatley by John Westbrooke Chandler, 1796 © RBS 2018

George Wheatley (unknown–1798) was a clerk in the London bank Messrs Drummond.

Almost nothing is known of George Wheatley’s early life, except that he may have come from the village of Lanchester, County Durham. His will contains numerous references to the parish, including a bequest to the poor there.

The identity of his parents is not known, but he had at least one sister, Mary.

George Wheatley began working at the London bank Messrs Drummond early in 1761. By the late 1770s he was one of the firm’s two most senior clerks, along with his colleague Alexander Hope. Together they had responsibility for the day-to-day management of the business on behalf of the partners. They also signed banknotes on behalf of the firm and represented the interests of their fellow clerks.

In 1777 Robert Drummond, one of the bank’s partners, asked Wheatley and Hope to review the remuneration of clerks and suggest possible improvements. Their carefully-worded response was submitted ‘with the greatest respect and diffidence, having much reluctance to give an opinion in a case where we are so nearly connected’. They made the case for a system of remuneration that would attract and retain ‘clerks of integrity & abilities…entirely devoted to the business of the shop, & really interested in promoting its reputation & prosperity’.

In fact, Drummonds clerks at that time were comparatively poorly-paid. Wheatley and Hope recommended increasing the junior clerks’ salaries to match those paid at rival banks. They also suggested performance-related rewards in special cases. The bank’s partners implemented their proposals in full.

Although Wheatley was only an employee of the bank, it is clear that he earned the partners’ trust, and came to be treated almost as one of the family. He is known to have dined with partners, even on occasions when highly sensitive matters were under discussion. He was present on the evening in the 1780s when George Drummond broached with his cousin Andrew Berkeley Drummond the delicate matter of Andrew’s father Robert’s excessive borrowing from the bank. This conversation marked a turning point in Andrew Berkeley Drummond’s life – and in the history of the bank – and may even have happened at the instigation of Wheatley, whose intimate knowledge of the firm’s affairs was second to none.

George Drummond, too, was the recipient of Wheatley’s frank advice. Although very wealthy, he still managed to spend well beyond his means. In January 1785 Wheatley wrote him a remarkably blunt letter, advising him to curtail his expenditure in the interests of his growing family. It included very specific suggestions, ranging from keeping fewer horses and servants, right down to buying soap in bulk in London instead of paying over the odds in the local village. He observed, ‘you are also a very good customer to your taylor, your bookseller, etc, etc, not that you wear more clothes, or read more books etc than other people, but that you buy many you hardly wear, or read at all’. It is impossible to know whether, in the fullness of time, Wheatley’s advice might have had its intended effect. Four years later George Drummond died, aged only 31.

Wheatley continued to work for the bank until his death, by which time two of his nephews, Robert Marshall and George Lumley, were also working there as clerks.

No evidence survives of his having married or had children. He left most of his estate to his sister Mary Lumley, and to his nieces and nephews. His will also made provision for the purchase of mourning rings for his friends at the bank, including Alexander Hope, all his fellow clerks, and the partners.