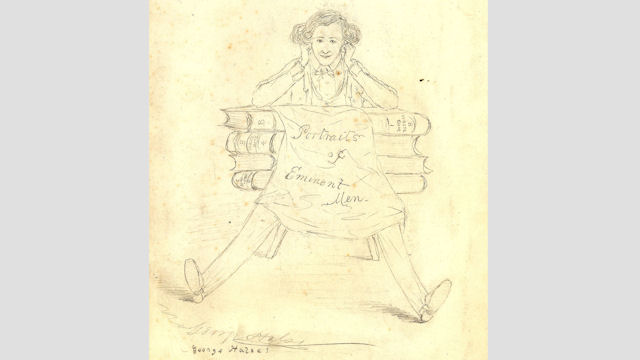 George Frederick Halse (1826-95) was a sculptor and writer, and an employee of Messrs Drummond.

George Halse was born on 1 May 1826 at 4 Stafford Place, Pimlico, the 8th of 12 children of John Halse and his wife Clarissa Fenwick. His father had worked as personal valet to the Duke of Rutland, and in 1820 had been appointed page to King George IV, later becoming resident state page at St James’s Palace.

In 1833, on the express wishes of King William IV, Halse took up a place at St Paul’s School in London. It is not known what he did in the years immediately after he left school in 1841, though his father is known to have written to various important figures, including Viscount Melbourne, Lord Palmerston, the Duke of Wellington and Sir Robert Peel, seeking positions for George and his brothers.

On 7 December 1846 George Halse became a clerk with the bankers Messrs Drummond of Charing Cross in London. The opportunity had possibly arisen through the bank’s partner Andrew Robert Drummond, who was son-in-law of Halse's father’s former employer, the Duke of Rutland.

Halse started in the bank as a junior clerk, but steadily rose through the ranks, becoming head of the ledger room by 1886. In 1890 he became chief clerk and manager, running the bank’s business and managing its staff on a day-to-day basis on behalf of the partners. He was still working at the bank at the time of his death, having completed 49 years’ service.

George Halse had wide-ranging artistic interests, developing a reputation as a sculptor, illustrator and writer, and it is for these activities that he is primarily remembered today. He is known to have produced 92 named sculptures, his subjects including women and children as well as famous contemporaries such as the Duke of Devonshire, the Marquis of Salisbury and the Bishop of Bath and Wells.

He frequently exhibited his work, including in shows at the Royal Academy, the Royal Scottish Academy, the Royal Glasgow Institute of Fine Arts and Manchester City Art Gallery. His work, particularly his depictions of children, became very popular, and some pieces (including Young England and Young England’s Sister) were reproduced for sale in parian ware. Others were featured as engravings in the Illustrated London News. His marble group Advance Australia became particularly well known. His guide to sculpture, The Modeller, was issued in 5 editions between 1880 and 1894, and he wrote for a number of journals on the subject.

Among his known surviving work is an undated bust of Messrs Drummonds’ founder, Andrew Drummond. In 1867 he exhibited at the Royal Academy a bust of Mrs Robert Drummond, wife of one of the bank’s partners. He made sketches of some other members of the Drummond family.

His published writings included novels, poems and verse stories. Two of his books were illustrated by his friend Hablot Knight Browne, who under the pseudonym Phiz became famous as an illustrator of the novels of Charles Dickens.

An 1859 collection entitled Pastoral and Other Poems by a Mrs George Halse was possibly the work of Halse’s wife Matilda.

In 1849 George Halse married Matilda Lydia Davis, whose father Thomas was adjutant of His Majesty’s royal bodyguard at St James’s Palace. They had four children together:

The family lived at 5 St Ann’s Villas, Kensington until around 1865 when they moved to a newly-built semi-detached house at 15 Clarendon Road, Notting Hill. By 1887 Halse had also leased the adjoining 13 Clarendon Road, to the rear of which he built a studio.

By November 1895 Halse had been given medical advice to retire, but he believed he was still fit for work. He was keen to complete 50 years’ service with the bank, a milestone he was only one year short of reaching.

The following month, however, Halse died, possibly a casualty of a contagious illness that seems to have struck the bank’s staff at around that time. In a letter to staff announcing Halse’s death, the bank’s senior partner remarked that ‘we have all lost a truly loyal, amiable and invaluable colleague in the person of Mr George Halse. No one knew better than I did his kindness of heart, his unselfish and unswerving zeal for the business and his ever thoughtful, unbiased and affectionate consideration for us all.’

Halse’s widow Matilda died just 3 months later. Their gravestone in Kensington Cemetery was decorated with an angel sculpted by their daughter Emmeline.

Related publications and other sources