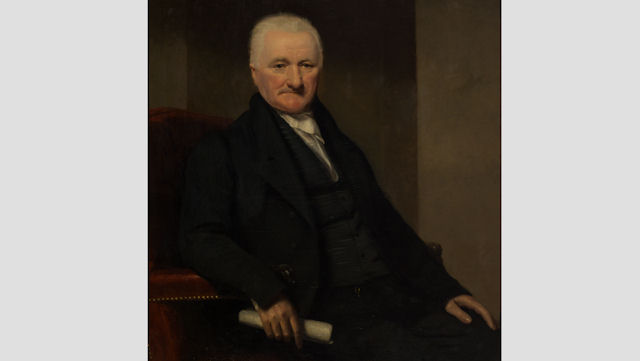 Forrest Alexander (1759-1833) was an Edinburgh merchant, entrepreneur and founder of Commercial Bank of Scotland.

Forrest Alexander was born in 1759. He was the youngest child of a sailcloth weaver in Leith who died in Alexander’s early childhood. At around the age of 7 he went to work in the weaving shop where his father had worked. He was later apprenticed to a shoemaker in Leith, and after completing his apprenticeship worked as a journeyman shoemaker.

Forrest Alexander pioneered large-scale boot and shoe production in Edinburgh. He established his first bootmaker's shop in Leith in the 1780s. In around 1793 he opened another shop in Low Terrace, Edinburgh. He later opened a ladies’ shoe and boot shop, also in Low Terrace.

In 1799 he bought a tanyard and began to focus more on a leather wholesale business. He withdrew from active involvement in his shoe shops around 1807. He remained a partner in the leather business of Alexander & Co until the end of 1816, although from 1810 onwards his attention was more taken up with banking (see below).

The success of Forrest Alexander’s boot and leather businesses enabled him to plan and invest in the establishment of numerous other business ventures, including:

These ventures met with varying degrees of success. None came near to matching the scale or longevity of Forrest Alexander’s banking enterprise.

Around 1808 Alexander’s bank unexpectedly refused a request to discount some bills of exchange for him. This incident prompted Alexander to start planning a rival bank, in the hope of creating a bank that would be more attuned to the needs of business customers. After 18 months of preparation, his scheme led to the foundation of Commercial Banking Company of Scotland in 1810.

Alexander served as a director of the bank from its foundation until his death in 1833. Even in later years, after he had withdrawn from most of his business interests, he continued to visit the bank daily and to take an active interest in its affairs. In 1827 the bank commissioned a portrait of him to hang in its directors' meeting room, as a tribute to his role in its formation and success.

Alexander married his first wife at a relatively young age. She was a Miss Goodsman or Goodleman, a daughter of the foreman of Messrs Hutton & Sons, a large Rope & Sail Manufactory in Leith. They had six children together: Jessie, Grace and John (ages not known); Robert, born in about 1791; James, born in about 1793; and Samuel, who died in infancy.

Alexander's first wife died of consumption at the age of 32 in about 1793.

Alexander married Margaret Braidwood around a year later. They had several children, including William, born in 1798, and Thomas, who died in childhood.

Other interests and character

Alexander's charitable interests included Edinburgh Beneficent Society, in whose establishment he was involved; Magdalen Asylum, of which he was a director; and the Destitute Sick Society, for which he was a visitor. The son of one of his contemporaries remarked, ‘My father...[said] that Edinburgh was more indebted to him than to any other man of his generation.’

Forrest Alexander, always conscious of the education he had missed in early life, devoted significant effort to self-improvement through education in later years. He set aside an hour every day, between breakfast and going out to work, for private reading and study. He was one of the first subscribers to Edinburgh Subscription Library.

On Saturdays he regularly played golf.

‘During the whole course of my father’s long life, I never heard escape his lips a word, or phrase, low or vulgar. In company he appeared quite at his ease, his manner was free from affectation, or any the nearest approach to vulgarity; his entrance to the Drawing Room, and introduction to the great and the learned betrayed no embarrassment or awkward constraint, his approach to each of the guests was dignified and polite, calm and unobtrusive. No one could suspect, but, that from boyhood he had enjoyed equal advantages as himself.’

‘For 30 years his dress was a black suit, short small clothes tied at the knee, black silk stockings and shoes. In early life he had dressed fashionably, for I recollect he had a great assortment of silver-mounted knee and shoe buckles, which he had worn the time such were in vogue. He had not been insensible to admiration, as on more than one occasion, he has told me, his well made legs had not escaped the notice of the young ladies.’

In 1828 Alexander became involved in a dispute with former business partners who were also members of the Baptist congregation of which Alexander had been a member throughout his adult life. The dispute was referred for arbitration, which led to Alexander's expulsion from the congregation on grounds of having submitted a matter between church members to non-church judgement.

In his last few years he largely withdrew from public and business life, although he continued to make daily visits to the bank and to Insurance Company of Scotland, the two businesses in which he remained most interested. He died on 15 July 1833, at the age of 74.