New survey shows signs of optimism as downturn in business activity eases, but small firms are especially cautious about outlook. 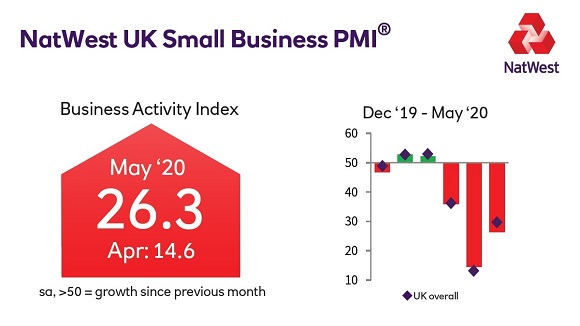 The new NatWest UK Small Business PMI® survey has identified a clear improvement in the business environment since April, with the downturn in private sector output moderating from the record drop at the peak of the coronavirus disease (COVID-19) outbreak. However, small businesses are more cautious about the year ahead outlook than their peers in all three main sectors covered by the new survey, prompting NatWest to unveil a Small Business Taskforce to support its customers through the next phase of recovery.

Andrew Harrison, NatWest’s Head of Business Banking, commented: “This survey demonstrates the support that small businesses need as they adapt to a very different world. That’s why we’re establishing a Small Business Taskforce with a range of partners, including the British Chambers of Commerce to ensure that we can play our part in supporting our customers and by extension the UK economy. We know customer behaviour is going to change rapidly as a result of the crisis and we want to do everything we can to be here for our customers when they need us most.”

Signs of a turnaround were highlighted by a rise in the supporting Small Business Activity Index – which monitors output at private sector companies with 1-49 employees in the services, construction and manufacturing sectors – from 14.6 in April to 26.3 in May. Nonetheless, the index remained below the 50.0 no-change value and signalled the second-fastest drop in business activity since the start of the series in 1998. Small manufacturers recorded the slowest drop in output, followed by service providers, while those in the construction sector posted the fastest pace of decline.

Small businesses continued to experience a severe shortfall of new work in May and reported widespread business closures across their supply chains, despite a boost as some parts of the UK economy began to reopen with social distancing measures. Difficulties sourcing materials, restricted transport capacity and the need to find alternative suppliers all placed a particularly strong burden on small business costs in May, especially in the manufacturing and construction sectors.

Employment trends among small businesses have been more resilient than elsewhere in each of the main categories of activity monitored by the survey. However, survey respondents experiencing a slump in revenues overwhelmingly commented on use of the government’s job retention scheme to help keep on staff.

Stephen Blackman, Principal Economist, NatWest, said: “During crises, surveys signal mood as much as activity. And the slight uptick in May’s Small Business PMI tells us that, at least, the worst should be behind us. As the survey highlights, the furloughing schemes have been instrumental in limiting the scale of job losses across the UK.

“The question is, what happens as these schemes unwind? And here the news is mixed. More than a third of small business in services expect a further reduction in activity this year. Yet, fewer firms now anticipate a reduced workforce than they did in April and there’s even tentative signs, via VAT reports, that new businesses are starting; though modestly, it must be stressed. It’s worth noting that most of what is captured in this survey occurred before further easing in lockdown measures. Directionally, this is just what we hoped to see. It now needs to accelerate.”

May data highlighted that small service sector companies remained under severe strain, despite a boost in some areas as parts of the economy began to reopen with social distancing measures. At 25.9, the Business Activity Index was well below the 50.0 no-change mark and the second lowest since the start of the survey in 1996.
Around 60% of small UK service providers reported a drop in business activity during May. The proportion recording a fall in output was down from 78% in April, but it exceeded the equivalent figure for large service sector companies in May (49%). On a more positive note, the percentage of small service sector firms signalling activity growth in May (11%) was up from just 6% in April.

Latest data indicated that small manufacturers fared better than companies of the same size in the service and construction sectors during May. A number of firms commented on a phased return to work with production schedules adapted for social distancing measures. That said, the index measuring manufacturing output at small businesses remained well below the 50.0 no-change value, with the rate of decline but now exceeding that seen across the sector as a whole.

Around 59% of small manufacturers reported lower production in May, while only 19% signalled an expansion. The proportion signalling a rise in output was up from just 12% in April.

May data pointed to sustained weakness across the construction sector, but a gradual restart of work on site with social distancing measures helped to moderate the overall rate of decline. However, material shortages held back smaller construction firms leading to them showing a faster drop in business activity than larger firms during May, which reversed the pattern seen in the previous month. Survey respondents often cited a lack of new opportunities to tender and project cancellations amid the COVID-19 pandemic.