NatWest Group has launched a carbon calculator to help staff understand the environmental impact of working from home and provide advice on reducing their carbon footprint. 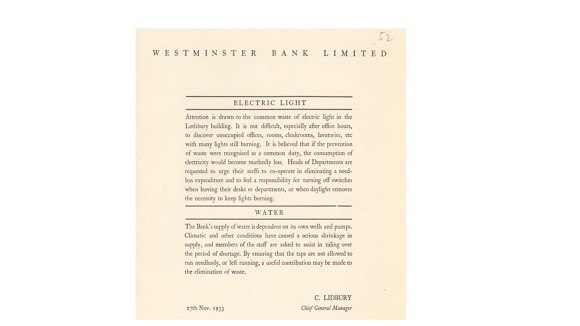 As the vast majority of the bank’s staff will continue to work from home until at least the end of September because of the coronavirus pandemic, NatWest Group has issued a new carbon calculator to provide tips to staff on how they can cut their personal carbon footprints.

With more than 50,000 staff working from home, NatWest Group has seen a 25% reduction in its electricity use in buildings, and business travel emissions have dropped by 2,000 tonnes of carbon a month.

The bank’s existing carbon calculator, which launched earlier in the year, has provided staff with tips to help them cut their personal carbon emissions relating to activities like commuting.

The new calculator, published to coincide with World Environment Day, provides staff with tips on how they can save energy, such as by changing how they use and charge their electric devices, switching to LED lightbulbs, and considering home insulation. It also provides staff with tips on reducing their carbon footprint when it comes to food, such as by cutting their food waste and buying locally produced food.

“Our colleagues want to know what they can do to help us tackle one of the biggest challenges the world faces.

“Climate change is one of the most important issues of our age and tackling it is at the heart of NatWest Group’s purpose.

“These staff communications from over the years are fascinating and show how NatWest has been talking to staff for years about climate action. Our new carbon calculator is the latest step in us becoming more energy efficient.”

The carbon calculators are the most recent ways the bank has empowered staff to cut their environmental footprints – with the earliest known communication about energy consumption being made to staff as far back as 1933.

NatWest’s first record of a memo going to staff to ask them to reduce energy consumption was made by Westminster Bank’s Chief General Manager, Charles Lidbury, in November 1933. In the memo, Mr Lidbury told managers electricity consumption would be less if the prevention of waste were recognised as a common duty.

Using scarce resources like power and hot water thoughtfully was again brought to the attention of staff during World War Two. Even in buildings unscathed by bombings, the war put pressure on the bank to save power. This time, reducing hot water and electricity consumption was sold to staff as their ‘patriotic duty’, with employees urged to use stairs and keep water use to a minimum.

During the energy crisis of 1973-1974, the bank again needed to adapt to measures taken by the government to save energy. This involved managers installing back-up generators in branches and being more frugal with energy, such as heating. Newspaper cuttings from the time show branch staff working by candle light.

In 1980, NatWest contacted all branch managers to ensure they were using light and heat carefully, and to investigate whether branch lofts were insulated. If not, they were asked to make local arrangements to get insulation fitted.

Three years later, a brochure was sent to all branches, explaining how big results could be achieved if everyone took small steps such as turning off lights in empty rooms and programming heating timers more thoughtfully. Royal Bank of Scotland launched a similar campaign in 1987.

But being more energy efficient is no longer about saving money or conserving energy: tackling climate change is one of the world’s biggest challenge and one of the banking group’s biggest priorities.

Making sure employees understand how their roles link to the bank’s climate change targets and ambitions is incredibly important if it is to meet them. In February, NatWest Group announced bank-wide training on tackling climate change.

Posted In
Our news
Tagged
2020