Private sector activity across the South East continued to decline in October, according to the latest NatWest PMI® data.

Private sector activity across the South East continued to decline in October, according to the latest NatWest PMI® data. This marked the second back-to-back contraction in five months, although the latest fall was only fractional and eased from September. Dragging on output was a sixth consecutive monthly fall in new business, with panellists reporting weak demand conditions. Meanwhile, backlogs fell moderately and firms cut workforce numbers for a third successive month. Despite falling business activity, expectations improved during the latest survey period, although remained subdued in the context of historical data.

The headline NatWest South East Business Activity Index – a seasonally adjusted index that measures the combined output of the region’s manufacturing and service sectors – posted 49.5 in October, rising from 48.4 in September to signal only a marginal contraction in private sector output. Business activity has fallen in all but one of the last five months, with survey respondents linking the recent decline to continued political and economic uncertainty.

Unfavourable demand conditions weighed on private sector output in the South East, as signalled by a sixth consecutive fall in new business. Panellists attributed the decline to client hesitancy amid continued Brexit uncertainty. That said, the pace of reduction eased to the softest since July.

With incoming new business falling in October, private sector companies continued to reduce their backlogs, stretching the current sequence of decline to over a year. The rate of backlog deterioration eased to the slowest since February, however.

Less pressure on capacity led firms to cut employment further during the latest survey period. The decline in workforce numbers was the third in successive months and mild overall.

Input prices rose sharply in October, with a number of firms linking higher cost burdens to greater wages and unfavourable exchange rates, which pushed up the price of imported goods. The rise was the slowest since June, however.

In line with rising cost burdens, private sector firms in the South East continued to increase their output charges in October. The rise was moderate and the joint-quickest since April. Moreover, the rate of charge inflation in the South East was the fastest across the 12 monitored UK regions.

Expectations for business activity strengthened in October, with sentiment at its highest for three months. Optimism remained subdued in the context of historical data however, with some panellists noting continued Brexit uncertainty had weighed on expectations. 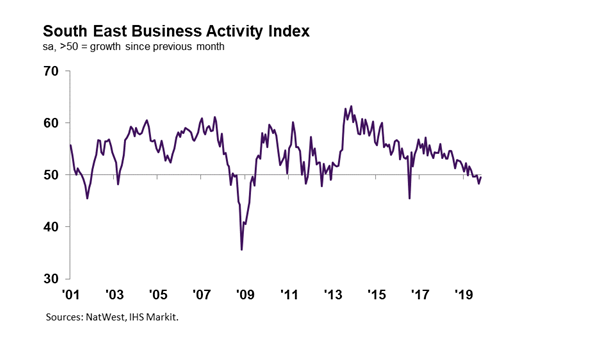 “The South East began the final quarter of 2019 on a weak footing, with a fractional contraction in private sector output in October. Weak demand conditions weighed on incoming new business and subsequently, on business activity, with further reports of client hesitancy as political uncertainty lingers.

“Meanwhile, private sector firms continued to cut workforce numbers for the third month in a row. The rate of job shedding eased and was only slight, however, with the South East reporting a softer fall than the UK as a whole.

“Nonetheless, expectations strengthened in October with sentiment the highest in three months. That said, some panellists noted that continued Brexit uncertainty is weighing on expectations. A clearer outlook may induce the uptick in demand that is needed for operating conditions in the South East to rebound.”