The new polymer note will feature an image of Kate Cranston, the turn of the century entrepreneur who commissioned Charles Rennie Mackintosh to design her famous Glasgow venue. 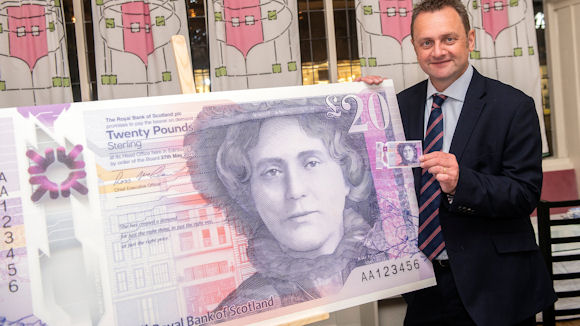 Malcolm Buchanan, chair, Scotland Board, Royal Bank of Scotland, with the new £20 note

Royal Bank of Scotland has unveiled the design of its first £20 polymer note. Featuring the image of historic Scottish entrepreneur Kate Cranston, the note was revealed at her legendary tearoom in Glasgow - Mackintosh at the Willow.

Kate Cranston, from Glasgow, made her mark for her series of tearooms across the city. Her flagship venue at 217 Sauchiehall Street, is celebrated by architects and designers due to the interior designed by Charles Rennie Mackintosh.

Designed in partnership with Scottish arts’ organisations and designers including Graven Images, Nile, Stucco, Timorous Beasties, O’Street and the Glasgow School of Art, the note, which will enter circulation in 2020, will be the first £20 Scottish banknote to feature a woman other than the Queen, on its front.

The £20 is the third in a series of ‘Fabric of Nature’ themed notes made from De La Rue’s Safeguard® polymer material and will also contain a variety of new security features, making it difficult to counterfeit but easy to authenticate.

Commenting at the launch, Celia Sinclair, Chair of the Willow Tea Room Trust, said: “We are delighted that the image of Kate Cranston is on the Royal Bank of Scotland £20 note. She was a very interesting and intelligent woman, an excellent businesswoman who changed attitudes. The Salon de Luxe, the centrepiece of Mackintosh at the Willow, was a symbol of social change in Glasgow where women began to socialise outside the home.

“She was serious about training – she ran all of her own courses and all her staff had to toe the line. She grew her own flowers for the tearooms, fresh foods were supplied by her own dairy. I think there were many women like Kate Cranston around at that time, but history simply doesn’t remember them, but now I am glad to say we are with this very fitting tribute.”

In designing the new notes, Royal Bank of Scotland launched the People’s Money programme and engaged with thousands of people across Scotland through workshops, online communities and polling surveys.

As a result, ‘Fabric of Nature’ was chosen as the theme. The choice of Kate Cranston to feature on the £20 note was taken by the Royal Bank of Scotland Scottish Board.

“Kate Cranston’s legacy touches so many aspects of Scottish life that we, as a nation, are justifiably proud; entrepreneurialism, art, philanthropy and dedication. Choosing the design of the £20 note was an important decision for it is Royal Bank of Scotland’s biggest circulating note, with £736m currently in circulation.

“As such, it is fitting that such a figure as Kate Cranston will be celebrated on the face of our most popular note.”

In keeping with the Fabric of Nature theme, the new £20 features illustrations of red squirrels on its reverse and also features the blaeberry fruit. It also includes extracts from 16th century Scottish poet Mark Alexander Boyd’s work, Cupid and Venus.

The new note will carry the same exclusive weave pattern developed by textile designers Alistair McDade and Elspeth Anderson for the £5 and £10 polymer notes.

The red squirrels on a tree illustration for the £20 follow mackerel in the sea on the £5, and otters on the shore for the £10.

Kate Cranston, from Glasgow, made her mark with her series of tearooms across the city. Her flagship venue at 217 Sauchiehall Street, is celebrated by architects and designers due to the interior designed by Charles Rennie Mackintosh.

The tearooms made a cultural impact during her life due to offering venues where women could enter unchaperoned. Following her death in 1934, her fortune was left to support the poor and the homeless in the city. 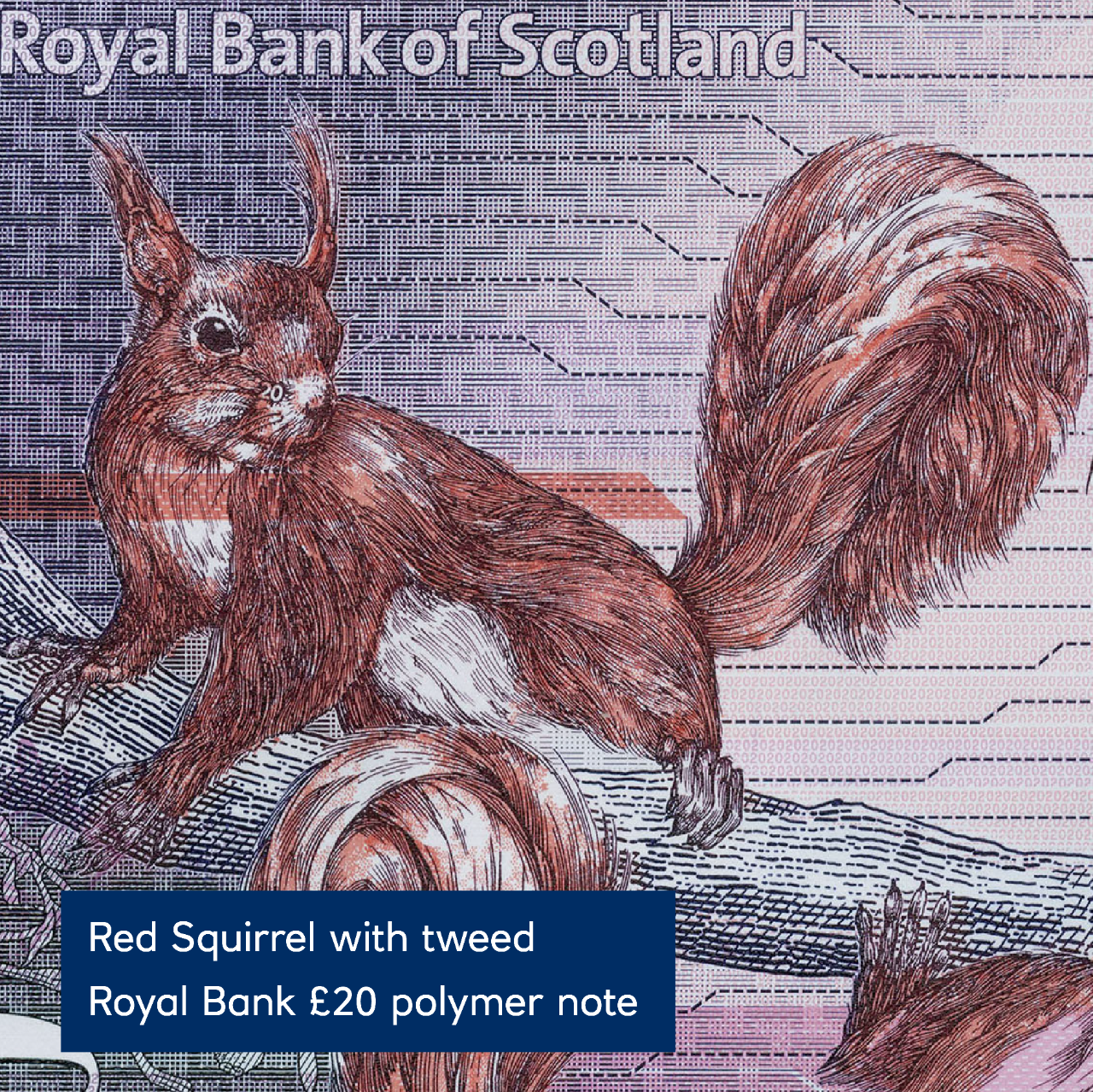 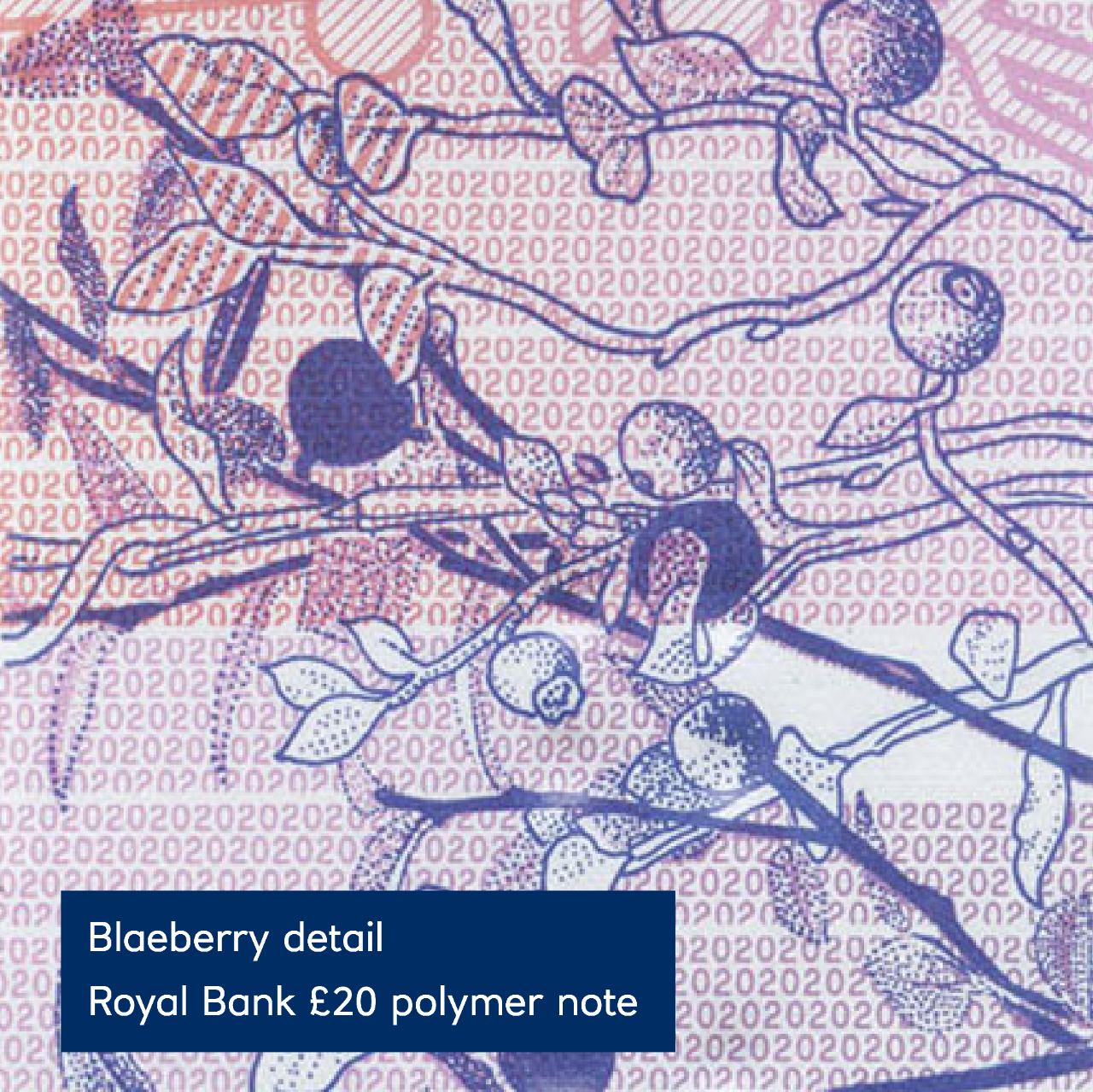 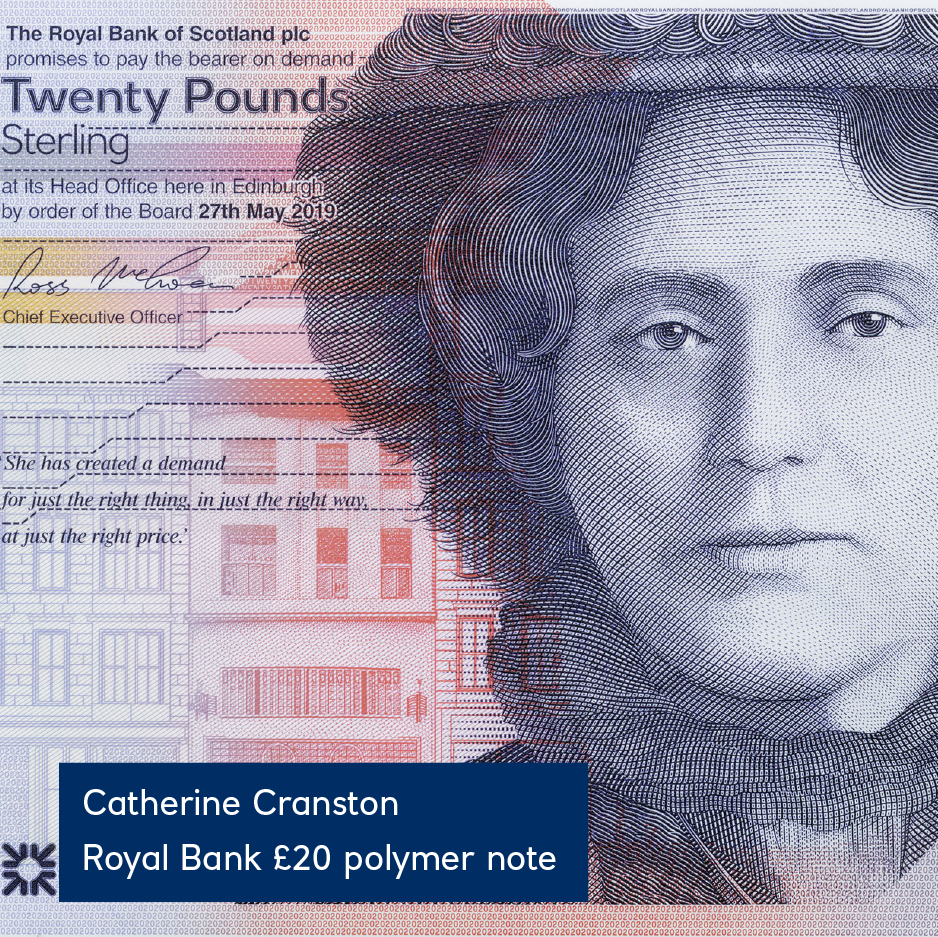