Royal Bank of Scotland has carried out a detailed look at the country’s mobile app behaviours for its first Mobile Microleisure Report. 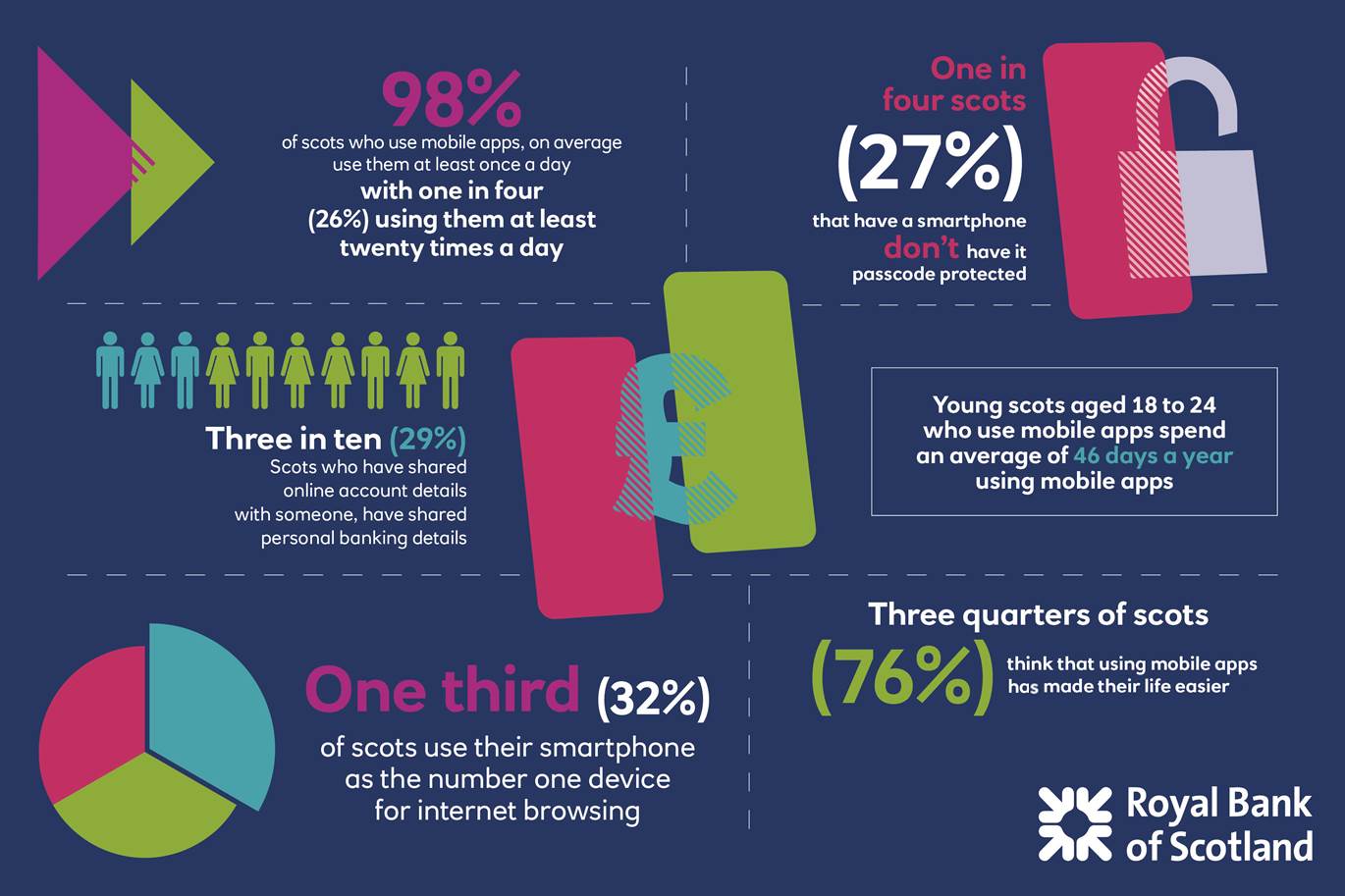 Released this week, the Royal Bank of Scotland Mobile Microleisure Report, conducted by polling firm YouGov, looks at how Scots have embraced app technology in their day-to-day lives and how they use their mobiles on the go in an ‘always-on’ world.

Key findings from the report include:

• Three in ten (29%) Scots who have shared online account details with someone, have shared personal banking details

And as the bank encourages people to take measures to keep themselves safe and secure online, the report highlights some startling findings about people’s attitudes to security while using apps.

While the online survey reveals that 90% of the Scottish population believe mobile app security is important, one in four (27%) who own a smartphone don’t use a passcode.

But those polled demonstrated a worrying lack of understanding of the measures that would lower the likelihood of them becoming the victim of scams or mobile fraud.

And Scots appear to prioritise the security of their love life over everything – with just one in 100 saying they have shared their dating app log in details with someone else before.

Unsurprisingly, the report found that out of all Scots who use apps, it is the youngest Scots who are the most prolific app users, with 18 to 24 year olds spending an average of 46 full days each year using them.

Young people also feel the benefit of having a mobile banking app, with 72% of 18 to 24 year olds saying that their mobile banking app made them feel more in control of their personal finances, however they showed a profound lack of knowledge of how to stay safe and secure when accessing apps, with just under one in six (13%) 18 to 24 year olds sharing their login details for one of their online accounts with a friend.

“This report confirms what researchers in the human-centred security area have been saying for years.

“When there is tension between convenience and security, convenience always wins. It is unsurprising that people do not want to type in a pass code multiple times a day.

“Apple's use of fingerprint and face biometrics are a positive move in making secure access to phones more convenient and I would expect to see an increased uptake of security behaviours as these become more ubiquitous and pass codes are phased out.

“It is also unsurprising that young people share their personal banking details. Feeling connected to other people is a very deep need that we all seek to satisfy. What better way to achieve this than demonstrating trust by sharing a password?

“This is the first Royal Bank of Scotland Mobile Microleisure Report and the results have thrown up some startling insights into our mobile app use - especially how we prioritise what we keep secret.

“The report highlights a worrying lack of security awareness among all age groups, including younger audiences who tend to be the most comfortable using online apps and online payment methods.

“The Royal Bank of Scotland is here to help everyone get savvy about security by providing expert guidance on financial protection, identifying risks and finding solutions so that all generations understand the risk and are better prepared.”

You can download the Royal Bank of Scotland Microleisure Report here (PDF 3.9MB)