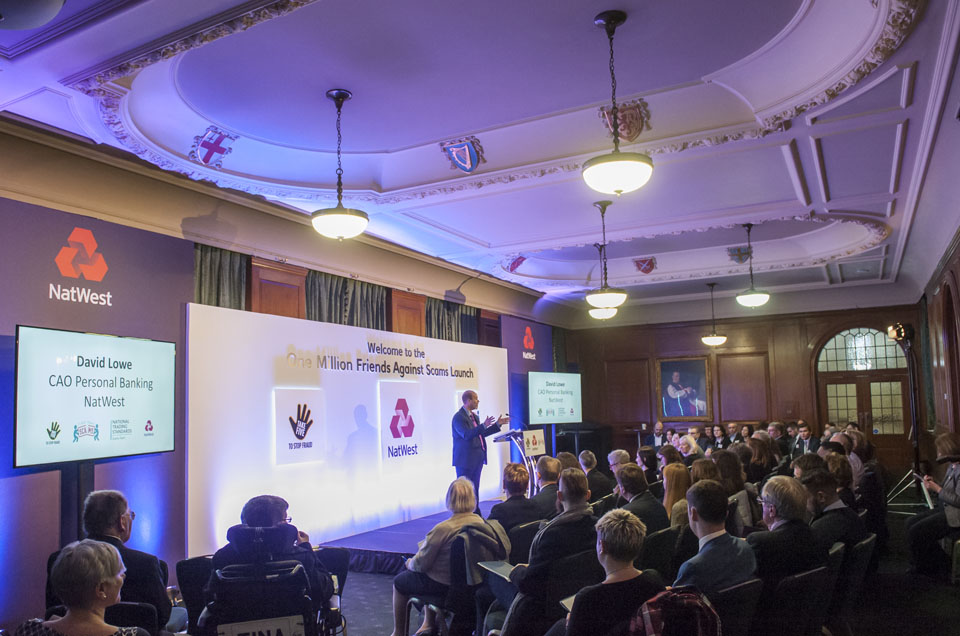 The Friends Against Scams launch event at Westminster.

The expansion of the Friends Against Scams campaign has been announced by the Government this morning as part of Take Five to Stop Fraud Week. Take Five to Stop Fraud Week is a national campaign run by Financial Fraud Action UK and the UK Government that provides practical advice on how you can stay safe from fraudsters. NatWest is a founding partner of the programme and more banks and companies are being encouraged to help the campaign.

Scams affect the lives of millions of people across the UK and postal, telephone and doorstep scams are often targeted at disadvantaged consumers or those in vulnerable situations. The National Trading Standards Scams Team estimates that the cost to consumers as a result of these scams is between £5 and £10 billion a year.

Since its launch last year the Friends Against Scams campaign has already provided training to more than 30,000 people, helping them understand how to spot a scam and empowering them to help prevent relatives, neighbours and friends from becoming victims.

“Fraud is now the most prevalent crime in the UK, so I am delighted to launch the One Million Friends Against Scams Initiative during Take Five Week.

“We know that the more we talk to each other about scams, the less likely we are to fall victim to them so these campaigns are vital.”

“As the National Trading Standards Scams Team sees on a daily basis, criminal scams do huge damage to our society. The people who are targeted are often in the most vulnerable circumstances and the impact is huge – from significant financial losses to emotional damage with victims feeling frightened and hopeless.

“The aim of the Friends Against Scams campaign is simple – to reduce the number of people falling victims to criminal scams. Since its launch last year the campaign has already made an impact, with tens of thousands of people already signing up. I’d encourage anyone interested in the campaign to sign up at www.friendsagainstscams.org.uk.”

“We are proud to be a founding partner of the Friends Against Scams Programme and the official bank partner of the one million friends launch. Having trained 22,000 colleagues across the bank we are already seeing a real impact which has helped customers avoid becoming victims. However more still needs to be done to prevent people becoming the victims of scams and we are proud to support this ambitious target.”

For more information about the Friends Against Scams campaign please visit www.friendsagainstscams.org.uk