Inflation continues to rise above the 2% target but the Bank of England sees no need to raise rates (yet). That’s the way things will remain for some time, just as long as expectations of future inflation don’t take off, pay growth remains muted and investment and export demand pick up the baton of growth from the consumer. 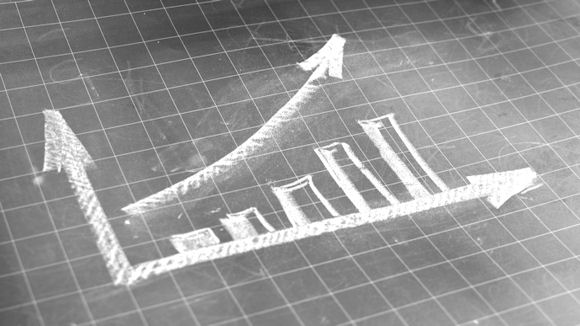 blackboard with moving up graph

No change, but don’t get complacent. The Monetary Policy Committee left interest rates on hold at 0.25% last week, despite one vote for an increase. The 7 to 1 majority in favour of holding thinks that all the expected rise in inflation is down to sterling’s depreciation and therefore doesn’t merit a crackdown from interest rates. But they also were keen to send a warning signal. Market expectations of interest rates currently imply just one 0.25% increase in the next three years. But if the economic forecasts set out by the MPC are realised it cautioned that it could want to raise rates faster than that snail’s pace. Not a promise then, but a caution against getting too complacent.

Shuffling the deck. The UK’s sluggish growth in Q1 posed a dilemma for the MPC’s latest set of forecasts. The Bank of England expected growth this year to be heavily reliant on consumers’ spending, but that was precisely the part of the economy that was weakest at the start of the year. Yet just as the consumer has been weaker the MPC sees signs that business investment and exports are likely to be stronger. The result is no meaningful change to the GDP growth numbers for 2017, now 1.9%, down from the previous 2.0%, but instead a shift in the drivers of that growth towards an arguably more balanced footing. Let’s hope that prevails.

Capital raising. UK industrial production fell 0.5% between February and March. And for Q1 as a whole growth was just 0.1%. But a warmer than average winter, which means we need less energy, is a big reason for that weak performance. Manufacturing is actually progressing pretty well. It’s just enjoyed its strongest yearly growth since 2014 in Q1 with output up 2.6%y/y. A driver of that is a 5%y/y rise in the manufacture of capital goods - the strongest rate of growth in over five years. It could indicate firms are pushing ahead with some investment. A welcome development amidst chronically weak productivity growth.

Widening. Sterling’s post-referendum depreciation should help rebalance the UK’s trade deficit. That’s the theory. In practice, it’s more complicated. Time lags, supply chains and imports all have an impact. The UK’s trade deficit for goods and services almost doubled to £10.5bn between Q4 2016 and Q1 2017. Imports rose by 3.3% over this period while exports fell by 0.5%. The surge in imports was largely due to machinery & transport equipment (notably cars), oil and chemicals. In the three quarters since the referendum, the import of goods has outpaced exports growth. Within the EU, the trade flows are slightly more encouraging with exports up 13% since Q2 2016 while imports are up less than 12%. Rebalancing UK trade remains a (slow) work in progress. For now, exchange rates are important but the post-Brexit trading arrangements will be more significant.

Zero growth. 905,000 people reported that they were on a “zero-hours contract” during Q4 2016, representing 2.8% of people in employment. The change from Q2 2016 (last available data point) was just 2,000 – a close to negligible change after a rise of almost three quarters of a million in the past six years. Who are they and how much do they actually work? They are more likely to be young, part-time, women, or in full-time education. 25 hours is their average work week. Most are happy with that but one in three would like more hours, compared to 9% of people in other types of employment.

Reversing? According to the Halifax, UK house prices fell by 0.2% in the three months to April compared with the preceding quarter. That was the first quarterly decline recorded since November 2012. For too long, house prices have been galloping ahead of income growth, making buying a home ever more unaffordable for many people. If this is a pause in ever-rising house prices that slowly starts to restore affordability it would be very welcome indeed.

Static? However, RICS, the surveryors’ body, painted a more complex picture. They said last week that new instructions to sell houses fell in April and that the number of houses for sale on their members’ books was close to record lows. Enquiries from prospective new buyers were flat. They expect sales to remain flat over the next three months. Weak demand but even weaker supply mean that prices are still rising, says RICS but the pattern varies across the country. Prices rose strongly in the North West but were flat in East Anglia and the North East. As has been the case for more than a year, prices continued to fall in London.