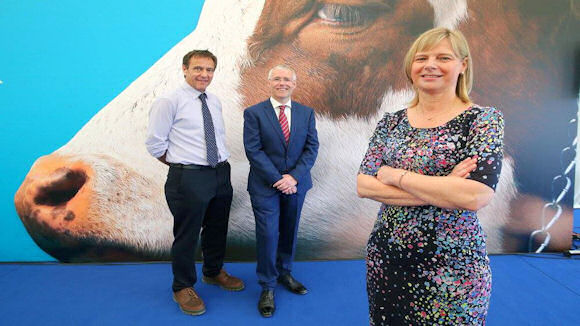 Ulster Bank has been involved in the Balmoral Show for many years, becoming the first ever principal sponsor in 2009. At this year’s event, which ran from 10-13 May, the bank welcomed leaders from the Northern Ireland agri-food sector including Moy Park Chief Executive Janet McCollum and others responsible for the development of one of the core parts of the Northern Ireland economy.

Speaking at the Balmoral Show’s flagship event, Janet McCollum highlighted that continually finding new and better ways of doing things, supported by investment and driven by great people, is at the heart of the company’s longevity: “To be innovative, we must always challenge conventional thinking. Attracting new talent with fresh ideas, and developing our own people, are some of the ways we do this at Moy Park. We need the best and brightest to look at careers in the food industry and to understand the breadth of roles that exist – from chefs and nutritionists to marketers, technologists, researchers and engineers.”

Ulster Bank’s Head of Northern Ireland, Richard Donnan, added: “The food and drink sector continues to be a key driver of the Northern Ireland economy and the leadership of people like Janet and other members of our audience today is absolutely central to that. Ulster Bank is strongly committed to continuing our support for innovation throughout the food chain and our principal sponsorship of the Balmoral Show helps us communicate that and our involvement in the sector as a whole.”

Led by Ulster Bank, the initiative has been supported by the Health and Safety Executive Northern Ireland, the Ulster Farmer’s Union and Young Farmers Clubs of Ulster.

Ulster Bank’s Senior Agriculture Manager Cormac McKervey commented, “Farming is one of our most important industries in Northern Ireland and while it can be extremely fulfilling, it is certainly not an industry without risks. We want to encourage our young people to become interested in farming but also recognise the necessity for children to be properly educated about how best to protect themselves and others, when playing on or near a farm and so I’m delighted that so many schools have got involved.”