For years now it has been a struggle to find anything positive to write about the Eurozone economy. Plagued by slow growth, high unemployment and intermittent sovereign debt crises it has been the developed world’s economic problem child. It’s too early yet to declare victory in the war against poor economic performance but there are signs that the region is staging a sustained, if modest recovery. 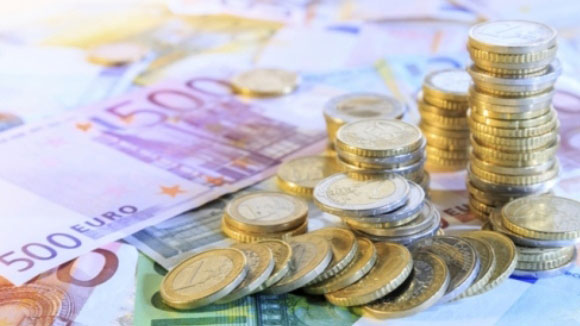 Trumped. You might best be seated for this one. The Eurozone outpaced both the US and the UK in Q1, growing 0.5% from the previous quarter (UK +0.3%, US +0.2%). It’s a respectable figure, the same as the previous quarter and one that lends support to the region enjoying a welcome cyclical upswing. Compared to the same quarter last year the economy was 1.7% larger – on this measure it falls short of the UK’s 2.1% but it’s still pretty good compared with a number of recent years. The caveats are that it’s a first estimate prone to revision and that the region has had solid autumn and winter periods in recent years only to slow in the middle of the year.

On the bounce. However, the signs are that the Eurozone’s decent run will continue. The Eurozone PMI reached a six-year high of 56.8 in April, with growth broad-based across nations and sectors. Output in both manufacturing and services hit multi-year highs and, while Ireland and Spain remain the poster kids, the difference in reported performance between the largest economies is the narrowest in the survey’s history. So the recovery is wide. How deep, however, remains uncertain. Is the region’s pick-up a vindication of monetary stimulus? Possibly.

Blot. It wasn’t quite the clean sweep. The Eurozone’s unemployment rate was unchanged between February and March at 9.5%. In absolute terms there was a drop of just 5,000. At least the queues of unemployed are still 1 million shorter compared to a year ago at 15.5 million. But progress on reducing the figure has slowed a little recently. And the disparities remain enormous. Germany’s rate is 3.9% and Spain’s is 18.2% and that’s after two years of 3%+ growth.

A hard or soft rebound? UK economic growth more than halved in the first quarter with the ‘hard’ or GDP measure of growth expanding at just 0.3% q/q. Will Q2 be any better? Early indications from ‘softer’ survey data suggests it could. All three Purchasing Managers’ Index (PMI) surveys exceeded expectations by rebounding in April. Manufacturing led the way with growth hitting a three-year high and order books filling up at their fastest rate since January 2014. Services and construction firms reported their best month of the year across a range of indicators, too. It’s only one month’s worth of survey data but could the economy be rebounding from a sluggish Q1?

More evidence. Business activity in the US service sector saw subdued growth in April, according the PMI. Output is rising, yet firms are neither overwhelmed with demand nor are workers left idle. Consequently, nine in ten businesses felt no need to change staffing levels. A balance then, but not a positive one if the US has stopped producing jobs. Markets were anticipating a Trump-propelled boost to jobs and growth, but confidence, along with bond yields, have waned in recent weeks.

Buoyant. If the survey data were mixed the job market numbers were emphatic. Another 211,000 jobs were added in the US in April. The unemployment rate now stands at just 4.4%, its lowest rate since 2001. With the number of “discouraged workers” – people who have stopped looking for a job because they believe they wouldn’t be able to find work – falling by 20% over the last year, it’s reasonable to expect that the market will tighten soon. However, wage inflation of 2.5%y/y suggests there remains some slack. For the Fed, however, such low unemployment is a sure signal to maintain the planned pace of interest rate increases this year.

Sobering. In 2005, 64% of Britons drank alcohol and 17% drank at least five days a week. There’s been a steady decline in the proportion who drink – 57% in 2016 – and a sharper fall in five days-plus drinkers – 10%. The nation’s youth are doing us proudest: 27% are teetotal now compared with 19% in 2005. The proportion of drinkers is highest in the South West (70%) and lowest in London (47%). Drinkers are better-off, more educated and more likely to be in a relationship. And we’re firmly a nation wine rather than beer drinkers.