Our Economists recap the key points from the Spring Budget 2017.

Rather than exit with a bang the Spring Budget left with a bit of whimper. Usually it’s a bit of work deciding what announcements to cram into a one page summary. Not so this time. That famous Budget Red Box will have felt light in the Chancellor’s grip today.

As is now customary the Budget commenced with a growth and public finances check-up, courtesy of the independent Office for Budget Responsibility.

Near-term up, medium-term down. There was good news for the very near-term at least. Growth in 2017 has been upgraded from 1.4% to 2%. It’s a similar pace of growth to 2016 and in line with the Bank of England’s view.  After 2017 growth slows. The table shows that compared to this time last year growth is expected to be about half a percentage point less through to 2019 and doesn’t get back up to 2% until 2021. That matters. 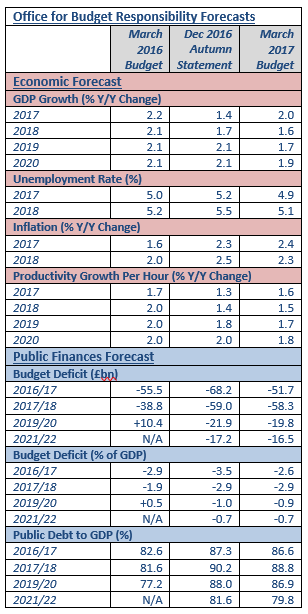 A ten year anniversary. A bumper couple of months for tax receipts has seen this year’s budget deficit revised down. At £51.7bn it will be £16.5bn less than projected as recently as November. It means that as a share of GDP the deficit will be a ‘mere’ 2.6%. It’s been ten years since the budget deficit began with a ‘2’. The days of crisis-induced, eye-wateringly high deficits are behind us, for now at least.

The public finances are getting themselves in better shape to take on a slowdown, should one emerge in the coming years. With huge uncertainty over how the economy will perform as Brexit negotiations proceed, this is no bad thing.

Reminder. But those smaller deficit forecasts are a reminder that significant spending cuts are yet to come. As the OBR itself details, real household income growth will grow in the coming years but tax credit and other working-age benefit changes will exert a downward pull each year through to the 2020s. Austerity has not been put to bed.

When’s peak debt? Deficits are the flow of debt year to year. What about the stock that’s been accumulated? It will round off the financial year at 86.6% of GDP. That’s high by the standards of recent decades, but below the average of the past 300. And the next financial year (2017/18) will see public debt peak at 88.8% of GDP.

Into battle. The most important lines in the table above rest in the middle – the outlook for productivity growth. The prospects for reducing the deficit hinge on it. The UK’s post-crisis trouble in beefing up that number is no longer a problem that can be shrugged off with a “it’ll be alright in the end”. The economy needs to be on a permanent war footing with regards to combating poor productivity. The Chancellor announced back in the Autumn a £23bn fund to assist the fight. And today he announced some measures that dip into that pot, including £300m for research talent including 1,000 new PhDs in STEM subjects, £270m for robots, driverless cars and biotech, £16m for a 5G mobile tech hub and £200m for fibre broadband. It isn’t radical surgery, but it’s helpful nonetheless.

It’s happy hour, again. Recent days saw calls to assist business hit by the changes to rates. In response the Chancellor announced a £1,000 business rate discount for pubs with rateable value under 100k (about 90% of all pubs). The Chancellor also announced a £300mfund for local authorities to provide discretionary relief.

Work (and so tax) evolution. The changing nature of work has thrown up a challenge. More people are self-employed and thus paying less tax. As the Chancellor himself outlined, an employee earning £32,000 will incur over £6,000 in National Insurance Contributions between employer and employee. And so the main rate of Class 4 NICs for the self-employed will increase by 1% to 10%, with a further 1% increase in April 2019. The full review in changing employment practices is due later this year. Further tax changes in response wouldn’t be surprising.

In terms of other measure in this slimmed down Budget; a reduction of tax free dividend allowance form £5,000 to £2,000. There was £2bn announced for social care, spread over three years. The Welsh government is to get £200m over four years and £350m for Scotland; cigarettes up 35p for a packet of 20, beer up 2p a pint, cider 1p, whiskey 36p a bottle and wine 10p. Oh, and vehicle excise duty was frozen. Again.

Where’s the largesse? The long-term project of reducing the budget deficit remains the name of the game. Brexit negotiations may well be a bumpy path for the UK economy. If there’s damage to growth the Chancellor wants some room for manoeuvre. But when he returns in the Autumn with his now once a year Budget show, it’s just as likely that low productivity is the biggest headache.