RBS has been informed by HM Treasury (“HMT”) that the Commissioner responsible for EU competition policy plans to propose to the College of Commissioners to open proceedings to gather evidence on an alternative plan for RBS to meet its remaining State Aid obligations. 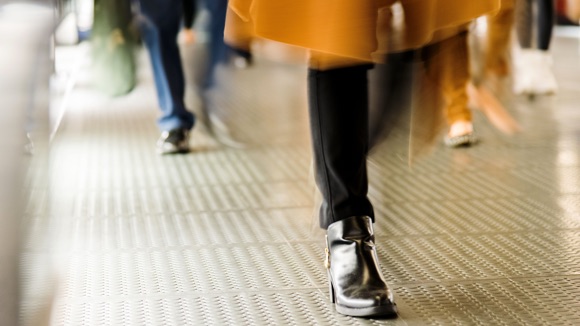 If adopted, this alternative plan would replace the existing requirement to achieve separation and divestment by 31 December 2017 of the business previously described as Williams & Glyn. As previously disclosed, none of the proposals to acquire the business received by RBS can deliver a full separation and divestment before the 31 December 2017 deadline.

The plan envisages that RBS will deliver the following revised package of remedies to promote competition in the market for banking services to small and medium enterprises (“SMEs”) in the UK:

Ross McEwan, RBS CEO, said “Today’s proposal would provide a path to increased competition in the SME market place. If agreed it would deliver an outcome on our EC State Aid divestment obligations more quickly and with more certainty than undertaking a difficult and complex sale and would provide much needed certainty for customers and staff.”

RBS has taken a £750 million provision within its 2016 Annual Results as a consequence of today’s proposal. This represents our best estimate of the cost of the above package of remedies at this juncture.

Our Q3 2016 Financial Supplement disclosed a breakdown of Williams & Glyn's income and customer loans and advances between Retail and Commercial as set out in the table below.

Subject to the plan becoming finalised and further discussions with the EC and HMT we will assess the timing and manner in which we reincorporate the business into the RBS franchises. This reintegration would likely create some additional restructuring charges during 2017 and 2018.

Our Q3 2016 Financial Supplement disclosed a breakdown of Williams & Glyn's income and customer loans and advances between Retail and Commercial as set out in the table below: 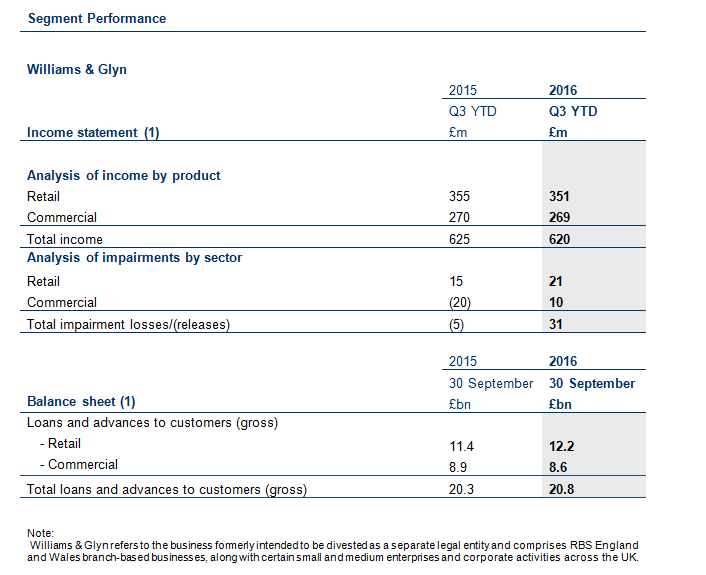 This announcement Includes Inside information which is a disclosure required by the European Union Market Abuse Regulation EU 596/2014 of 16 April 2014. “Inside Information” is used as defined in that Regulation.

This announcement contains forward-looking statements within the meaning of the United States Private Securities Litigation Reform Act of 1995, including those related to RBS and its subsidiaries' regulatory capital position and requirements, financial position, future pension funding requirements, on-going litigation and regulatory investigations, profitability, impairment losses and credit exposures under certain specified scenarios. In addition, forward-looking statements may include, without limitation, statements typically containing words such as "intends", "expects", "anticipates", "targets", "plans", "believes", "risk", "estimates" and words of similar import. These statements concern or may affect future matters, such as RBS's future economic results, business plans and current strategies. Forward-looking statements are subject to a number of risks and uncertainties that might cause actual results and performance to differ materially from any expected future results or performance expressed or implied by the forward-looking statements. Factors that could cause or contribute to differences in current expectations include, but are not limited to, legislative, fiscal and regulatory developments, accounting standards, competitive conditions, technological developments, exchange rate fluctuations and general economic conditions. These and other factors, risks and uncertainties that may impact any forward-looking statement or RBS's actual results are discussed in RBS's UK Annual Report and Accounts and materials filed with, or furnished to, the US Securities and Exchange Commission, including, but not limited to, RBS's Reports on Form 6-K and most recent Annual Report on Form 20-F. The forward-looking statements contained in this announcement speak only as of the date of this announcement and RBS does not assume or undertake any obligation or responsibility to update any of the forward-looking statements contained in this announcement, whether as a result of new information, future events or otherwise, except to the extent legally required.