The winners of the annual NatWest everywoman Awards were announced yesterday. For 14 years these awards have championed the women behind Britain’s most successful businesses, from promising start-ups in their early years of trading to established international companies. 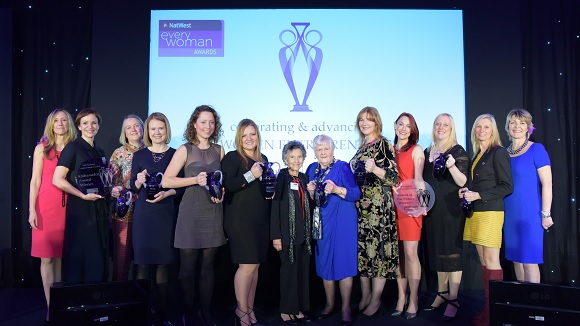 The 2016 NatWest everywoman Award was presented to Grace Lachowicz, founder of Dekko Interiors.

The UK is seen as one of the most attractive countries for business which is reflected by the surge in entrepreneurship in Britain in recent years. Despite these encouraging signs, the numbers of women-led start-ups remain significantly lower than that of men.  Both everywoman and the Women’s Business Council separately undertook research in 2016 with each concluding that role models play a vital part in encouraging and inspiring women to further their professional aspirations.  The winners of these awards will set an example to other women and demonstrate what can be achieved with vision and determination.

The 2016 NatWest everywoman Award was presented to Grace Lachowicz, founder of Dekko Interiors. This special Award is set apart from the category Awards as it honours not just a business woman who has achieved significant success, but also one who has broken down barriers and overcome tremendous challenges. Originally from Poland, Grace has built a £6.8 million company in just five years supplying kitchens, bathrooms and fitted furniture to residential developers.

Acknowledging that her gender and nationality initially worked against her, her self-belief and passion for her product saw her grow from a garage-based eBay business to securing contracts with the likes of United Living and Ballymore. Undaunted by her lack of means to fulfil these huge orders, she offered a personal guarantee and worked around the clock to ensure clients were satisfied.  More recently she has taken the design and manufacturing process in-house and her clients include the biggest names in the industry.

The other 2016 NatWest everywoman Awards winners were:

Sponsored by Crystal Clear this is awarded to an inspirational woman running a business trading for between 18 months to three years. It was won by London-based Pip Murray of nut butter brand Pip & Nut. In the 18 months since its launch, Pip & Nut has become one of the biggest players in the healthy foods industry, partnering with Nike and securing listings in over 2,500 stores.

Sponsored by Nutriment this award goes to an inspirational woman running a business trading for between three and five years. It was awarded to Helen Lord, from Windes – who founded the Used Kitchen Exchange with nothing more than a laptop, a phone and a car.  Her mission was to market quality pre-owned kitchens to cost-conscious families and buyers and in the process, dramatically reduce landfill.

Joanne Bass, from Peterborough, founder of XL Displays took home the Athena Award - for an inspirational woman running a business trading for between six and nine years.  Having been refused flexible working after the birth of her child Joanne was inspired to set up her own business. Her one-stop shop for exhibition banners, stands and designs turns over £4.2m and her recruitment needs are met exclusively from the local community.

London-based party accessory tycoon Clare Harris was presented with the Hera Award – sponsored by Sage - for an inspirational woman running a business trading for 10 years or more. Talking Tables was launched with £50,000 of personal loans and today employs over 50 staff in the UK, US and China supplying luxury department stores, supermarkets and independents with its quirky British designs.

The Iris Award – sponsored by Dell - for an inspirational woman running a business that uses technology in an innovative and disruptive way went to Smart Assessor’s Fiona Hudson-Kelly, from Warwickshire. Motivated by her apprentice son’s struggles with written work she devised a training assessment platform and won a million-pound investment challenge to grow the business. Smart Assessor’s mobile technology enables images, audio and video to be uploaded onto a Cloud-based platform and currently supports 200,000 users and 9,000 tutors.

The Aphrodite Award – for a mumpreneur who founded her business whilst raising children aged 12 or under, was won by Hillary Graves from London, founder of Little Dish. Hillary’s passion for healthy eating led to the launch of Little Dish in 2006, providing fresh, well-balanced meals for toddlers made from 100% natural ingredients.  Today her £12 million enterprise supplies retailers including Tesco, Sainsbury’s and Waitrose. In addition to this, she has written two cookbooks and teaches cookery in schools, laying the foundation for life-long healthy eating habits.

Chrissie Rucker MBE presented the Brand of the Future Award - sponsored by The White Company - to an entrepreneur whose early stage business demonstrates huge potential for growth. Helena Hills, from Bristol, founded TrueStart Coffee, the only coffee brand in the world designed to improve sports performance and provide an alternative to sugary energy drinks and synthetic pre-workouts. In just 18 months, Helena has exported internationally and supplied major UK multiples as well as gained brand champions including Paralympian Pamela Relph and the British Army Women’s Cycling Team.

In addition to the category awards two other special awards were presented at the ceremony. The Spirit of everywoman Award is in recognition of women whose determination, commitment and pioneering spirit has helped change the landscape for women in business in the UK and paved the way for others. This year the award was presented to both Eileen Pullen and Gwen Davis on behalf of veterans of the Ford Motors Dagenham dispute whose strike action triggered the passing of the Equal Pay Act of 1970 and whose story inspired the 2010 film Made in Dagenham.  The Ambassador Award went to Marcia Kilgore, the serial entrepreneur responsible for Bliss Spa, Soap & Glory, FitFlop and, most recently, Soaper Duper natural bath and body products.

“For 14 years the NatWest everywoman Awards have uncovered and celebrated the extraordinary achievements of Britain’s female entrepreneurs.  Starting a business from scratch takes courage and self-belief, qualities that our winners have in abundance.  We applaud their success and send them out to spread the message to other women that enterprise is a rewarding and fulfilling career upon which the success of the UK economy depends.”

“We are very proud to recognise these women, who are not just successful in their own businesses, but are also great role models. The importance of women in business cannot be underestimated, so we hope these role models will inspire other women to take their first steps in business. To help these entrepreneurs and would-be business owners, NatWest has a network of over 340 externally accredited Women in Business specialists who understand our customers’ ambitions and provide business support, mentoring and networking opportunities.”

Find out more about the everywoman Awards