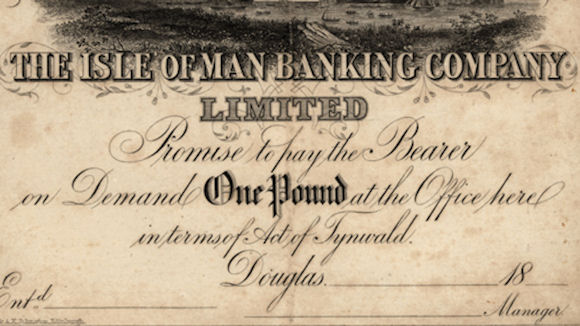 The Isle of Man Bank’s first banknotes were printed in black and brown with an illustration of the harbour of Douglas.

The Isle of Man Bank was born out of a crisis. When two of the island’s banks (Bank of Mona and Dumbell & Howard) were forced to stop making payments. residents created a new and more stable bank in 1865 as they tried to avoid the vulnerability of their existing institutions.

Legal changes in the 19th century meant that many banks in England and Wales stopped issuing their own notesbut these changes didn’t affect the Isle of Man. The Isle of Man Bank’s first banknotes were printed in black and brown with an illustration of the harbour of Douglas. They were popular with islanders and, within a couple of weeks of first issuing them, more than 5,000 were in circulation. The bank continued to issue its own banknotes until 1961.

During the First World War, large internment camps were established on the Isle of Man at Peel and Douglas, and the bank gave the island government the overdraft facilities it needed to build them.

By 1917, many of those eligible for military service had volunteered to join up, so the bank faced serious staff shortages. The lack of men meant, in February that year, the bank hired its first female employee.

By the 1930s, savings accounts were introduced for customers who wanted to save small amounts. Thanks to an innovative savings solution introduced by the bank, they were given a money box disguised as a book that could be discreetly hidden in a bookcase at home. The word ‘thrift’ on the spine was a sly reference to its secret purpose. The contents could then be regularly transferred to their account.

The Manx triskelion dates from the late 13th century and is the symbol for the Isle of Man, Sicily, Brittany and the town of Füssen in Germany. 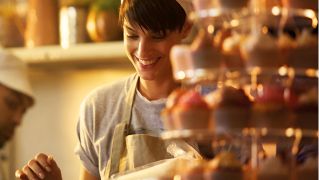