UK gross domestic product (GDP) increased by 0.4% in Q1. That means we’re currently enjoying the third-longest unbroken spell of growth in at least 60 years. At 0.4%, however, the pace of expansion was slower than Q4’s 0.6%. Both production and construction output fell but the dominant service sector motored ahead, rising 0.6%. But a word of caution: don’t read too much into a 0.2 points gap between Q4 and Q1, which could easily be revised. (Up or down.)

The UK housing market has hit a bump in the road in the form of the new stamp duty regime for buy-to-let (BTL) and second home purchases. Cue mad March haring to close deals and a 42% seasonally adjusted monthly jump in transactions. Meanwhile the number of mortgages approved for non-BTL house purchase fell -0.9%m/m. It will be some months before we can tell what the true impact of the tax change has been, but house price data for April suggests the initial effect may be milder than feared. Average prices rose 0.2%m/m according to Nationwide.

US GDP rose at an annual rate of just 0.4% in Q1, down from 1.4% in Q4 last year. Exports – down 2.6% – were the biggest drag, reflecting a strong dollar and a sluggish world economy. However, domestic demand growth was disappointingly weak, up 1.2%. This slowdown would be a concern if it continues. But a word of caution: the statistical tricks used to flatten out seasonal fluctuations haven’t been working too well in Q1 for a few years, depressing reported growth. A Q2 rebound is quite possible.

Weak growth in Q1 would have given the Fed no reason to raise rates for a second time in five months and they resisted the temptation. Their tone, however, was more upbeat than in recent months, conveying the sense that the US is on track for continued expansion, with inflation rising, and that they see early 2016’s market turbulence as a thing of the past. Risks remain, however, especially outside the US, and markets reckon that it will be November before the hike button is pushed again.

With the UK and US disappointing on the growth front, the Eurozone was surely similar. Right? Well, no actually. Growth in the Eurozone surprised to the upside in Q1, expanding by 0.6% from the previous quarter. A figure of 0.4% was expected. Spain turned in another good quarter, expanding by 0.8% and recording its fourth straight quarter of y/y growth above 3%. Even France was in on the act, expanding by 0.5%. And the word of caution here? Last year also saw a good Q1 from the Eurozone only for it to fall away in each of the following three quarters. Can the pace be sustained this year?

The Euro Area returned to deflation in April, with a -0.2%y/y fall in prices. This was entirely due to falling energy prices, down -8.6%y/y. Core inflation (which excludes food and fuel) was 0.7%y/y, down from 1%y/y in the previous month. Meanwhile the rate of joblessness in the single currency bloc fell to 10.2%. But with Germany’s unemployment rate at 4.2% and Greece and Spain’s above 20%, the Euro Area still has a very long way to go.

The Bank of Japan (BoJ) disappointed with no new measures to ease monetary policy last week. The currency promptly rose, pushing the strengthening against the dollar to 10% for the year. That’s bad news for the country’s exporters. And it’s bad news for the long-running battle against deflation. With negative rates already being used and a large quantitative easing programme being pursued, Japan needs something more aggressive. There are whispers of helicopter money - printing money explicitly to finance government spending or send to households directly. The BoJ may not quite be ready to take the plunge with such a radical move. But it’s inching closer. And the need has been clear for years.

China’s latest credit and fiscal stimulus could not save the manufacturing Purchasing Managers Index (PMI) index from falling in April. The reading of 49.4 (down from 49.7) means the gauge hasn’t been above the crucial 50-mark since February last year. New orders were weak but particularly for exports. But the overall message seems to be that it’s getting ever harder for China to stimulate growth through the old credit pump-priming means. 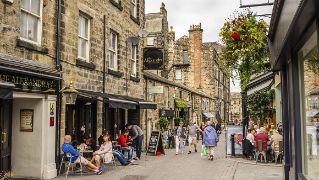