A view from behind the camera

A view from behind the camera

Richard Wilkinson, Customer Advisor at NatWest Huddersfield and one of the stars of The Bank: A Matter of Life and Debt gives some insight into how the filming worked and what the film crew were interested in. 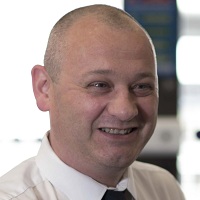 "It’s about honesty and letting people see exactly what goes on in a branch."

It’s not every day that a film crew makes a documentary in your branch so at first it was really strange having the cameras around. To be honest, when they said they wanted to make a documentary about a bank, we thought it would be a bit boring. But the film crew were fascinated by the workings of the bank.

They were interested in everything from the volumes of cash we handle and why customers rely on a bank, to customers’ relationships with money and the intimate ways that banks can play a big part in peoples’ lives. They really focused on how banks are an essential part of the local community. It was more about the team at Huddersfield and our day to day job and not about the bank as a whole. In a way I’m glad I was never talking on behalf of the bank – it was a relief to just be talking as Richard.

Some customers were really keen to be filmed but talking on camera about credit card debts or their income can be sensitive subjects for many people. Still, the crew managed to find willing participants – many of whom were in my appointment book.

They filmed so much. They came to my house and filmed me walking my daughter to school and they even fitted a camera to the inside of my car to capture my drive to work. But I’m not expecting them to use all of the footage – they filmed hundreds of hours so I’ve no idea what will be included and the editorial control rests with the broadcaster. My main worry throughout the filming was that our CEO would watch me in the documentary and would ask “why are we employing him!”. Fortunately Ross really enjoyed it so that wasn’t an issue.

Not everything shown will be positive, but it’s about honesty and letting people see exactly what goes on in a branch. Banks get a lot of bad publicity, so for the public to see how we serve customers and the big part we play in local communities is great.