Now in its 12th year, the NatWest everywoman Awards has become the defining event for Britain’s female entrepreneurs, celebrating the success of women-owned businesses across the country. 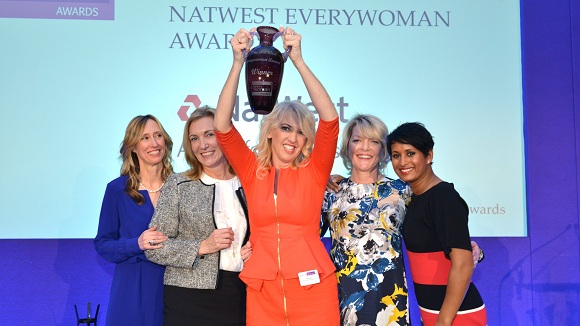 The NatWest everywoman awards celebrate the phenomenal success of the UK’s female entrepreneurs.

The programme reveals the stories of individuals, whose qualities and acumen have driven their success, applauding their achievements and creating inspiring role models.  Significant progress has been made to increase the influence of women in business and the UK now leads the way in Europe for entrepreneurship.

The combined annual turnover of the businesses owned by women at the NatWest everywoman Awards was estimated to exceed £3 billion demonstrating the phenomenal ongoing contribution that female-run and -led business makes to the UK economy.

The 2014 NatWest everywoman Award was presented to Karen Betts with her empire that encompasses Karen Betts Professional and Nouveau Beauty Group, including a pioneering medical tattooing enterprise, several leading cosmetics brands and a salon training business. “This woman is phenomenal”, judges commented when agreeing she had led her companies to outstanding success, growing them from a small office in Yorkshire to an international team of 182 employees with a turnover of £7 million.

Maxine Benson MBE, everywoman co-founder comments on the winners: “It takes a bold and gutsy individual to start a business and today’s winners are all women with vision and determination, qualities that have contributed to their success.  Some have businesses that are household names, others will achieve that recognition in the future.

All are joined by a common goal to succeed and to inspire.  Today we celebrate their achievements and acknowledge the challenges overcome and sacrifices made on the path to their success.  They not only fly the flag for British business, but are role models for future generations of entrepreneurs.”

Anne McPherson, Managing Director, Enterprise at NatWest says, "At NatWest, we recognise the importance of helping women set up and grow their businesses. We have over 200 externally accredited Women in Business specialists across the country who share and understand our customers’ ambitions and provide coaching, networking and mentoring opportunities to help them fulfil their potential and build successful businesses.

NatWest are delighted to have supported the everywoman awards for the 12th year running, and are pleased to see several of our customers amongst this year’s winners. These awards have created some amazing role models who inspire other women to take their first steps in realising their business ideas, and we would like to congratulate all of the outstanding entrepreneurs who have been recognised."