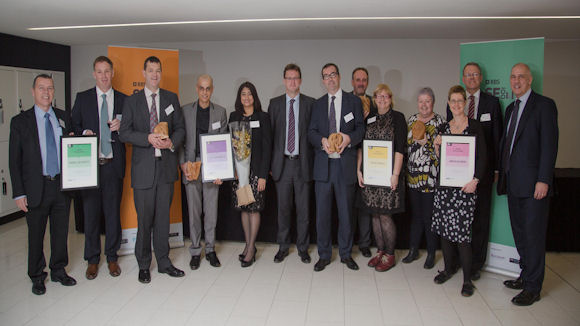 Ian Cowie, Chairman SME banking at RBS , with the winners of the RBS SE100 Awards 2014

RBS was delighted to pay tribute to some of these social enterprises who have been tackling some of the UK’s most pressing social problems, at the RBS SE100 Awards held on Monday 24th November 2014.

The winners included social enterprises who are working to get war veterans suffering from Post-traumatic Stress Disorder (PTSD) back into employment, as well as others who rehabilitate victims of abuse. Other winners were businesses working to raise awareness of prostate cancer amongst men’s groups, and others providing jobs and employment support in disadvantaged areas.

The RBS SE100 Awards is just one way that RBS is supporting social enterprise in the UK. Through the flagship RBS Inspiring Enterprise programme, RBS has also supported 2,638 social enterprises and invested £2,120,495 in the sector since January 2013.

This support is aimed directly at social entrepreneurs who may struggle to obtain finance and support from mainstream lenders. It recognises that social enterprises may have a different business plan to a traditional business model, and it looks at the social impact as part of the business return.

Ian Cowie, Chairman SME banking at RBS who presented the Growth Champion Award commented: “RBS is committed to unlocking and nurturing entrepreneurial talent – and giving social enterprises access to finance, markets and expertise. Congratulations to all 5 of the 2014 winners, it is a privilege to be recognising such fantastic and deserving organisations.”

Rob Wilson, Minister for Civil Society who presented the Trailblazing Newcomer award said of the RBS SE100: “Social enterprises play an important role in supporting the economy and strengthening local communities right around the UK. Key to their continued growth will be their ability to demonstrate clearly the vital impact they are making and so I would encourage all social enterprises and charities to sign up to the SE100, which will help them to do this.”

Understanding the benefits of social enterprise

Thom Kenrick discusses RBS’s history with social investment and why we partnered with the Cabinet Office to deliver the Social Investment Awards.

The UK’s first ever Social Investment Awards have recognised individuals and organisations for their role in supporting social businesses.