Individuals with the most potential for ‘high value’ entrepreneurship are twice more likely than the general population to be in the process of starting their own business, a new survey reveals today. 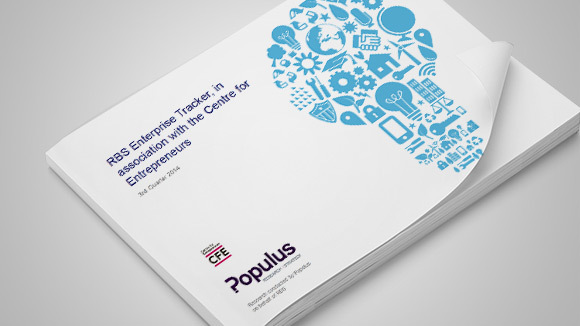 This is one of many findings from the RBS Enterprise Tracker. Conducted by Populus, the quarterly survey tracks people’s attitudes towards starting up in business. The poll interviewed 2,343 UK adults online between 8th and 13th August 2014. This survey also marks a new partnership between RBS and the Centre for Entrepreneurs think tank, which will help design and disseminate future surveys.

Following research by the Social Market Foundation that found individuals in full time employment with a degree-level education and a household income higher than £34,000 are more likely to become high-growth entrepreneurs, the RBS Enterprise Tracker has surveyed these individuals’ attitudes in detail.

The tracker finds that 8% of High Potential Individuals (HPIs) surveyed were in the process of starting a business, compared to 4% of the general population. However, the ambition gap is larger for HPIs, given their greater motivation to starting their own business. HPIs are also more likely than the general population to say they would like to set up a ‘for profit’ business.

Although High Potential Individuals are more likely to say that they have the necessary skillset  and that they know where they could get relevant information in order to set up their own business or enterprise, their fear of failure is above average too.

The tracker finds however, less than four in ten of the general population know where they could get more information about starting a business, despite the range of support programmes available through local bodies and the government. This figure is lower for 18-30 year olds.

The tracker goes on to reveal that there has been a decline both in the number of 18-30 year olds who wish to start up their own businesses  and those who are in the process of doing so . However, young people are still more inclined to start up businesses than all respondents taken together.

Young people continue to be more likely to perceive barriers to starting their own business than the general population. They are most worried about securing funds, the risks involved, and the current economic climate. Indeed, 64% of young people believe fear of failure would prevent them from trying to start a business - only 53% of UK adults would have a similar fear.

Encouragingly, concerns about the economic climate have shown a marked decline since 2012: falling from more than half of the population, to a third. Conversely, the confidence that now is a good time to start a business or enterprise has risen slowly from a fifth to a quarter.

“As the UK economy improves, it is encouraging to see more people gaining confidence that now is a good time to start a business.  The survey continues to show that access to finance and solid business advice are very important first steps for anyone starting a business. Whilst the fear of failure will be an issue for any new venture, we believe that even more people can convert their business ideas into reality, if they can access the right advice and support.”

Commenting on the survey findings, Matt Smith, director of the Centre for Entrepreneurs said:

“The ongoing lack of awareness of where to go for help in launching a business suggests that the business support community and government have far more work to do in simplifying and promoting initiatives to aspiring entrepreneurs.”

You can review the full enterprise tracker on the Inspiring Enterprise website.