The World Cup finalists proved themselves to be the crème de la crème of international football but how would it look if we ran the competition again with countries competing for UK exports? 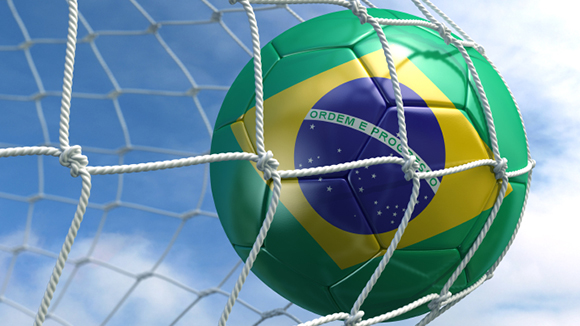 The competition for UK exports is just as fierce as the one for World Cup victory.

Germany have been crowned World Cup champions after winning a hard fought tie against Argentina which needed extra time to separate the two teams. They lifted the trophy in Rio de Janeiro after playing more than 540 minutes of football over the last month and waving goodbye to 30 other countries along the way. But how do Germany and their fellow finalists fair in a different international competition? The one for UK exports.

This re-imagining of the world’s biggest football competition begins by replaying all 48 group games with countries scoring points through UK imports rather than goals. Crunch games, as with the football version, include Spain v Netherlands in which the Netherlands triumph by more than two to one and a relatively close run tie between Russia and South Korea where the Russians take a narrow win.

Getting out of the group

Stephen Boyle says: “Topping the group as a potential export market requires two attributes. A country has to be attractive to UK firms; and big enough to warrant the effort.

“A number of things make a country attractive: it needs to be compatible with the UK, the country has to have growth prospects and it needs to be easy to do business with.”

“It turns out that qualifying for Brazil 2014 is a pretty good predictor of compatibility with the UK. Of the ten nations that are the most compatible with us - likely to be interested in a wider range of the things we’re good at making - six have made it to the Finals: Host nation Brazil, Argentina, Chile, Mexico, Uruguay and Columbia. The most compatible non-qualifiers are South Africa, Turkey and Peru, along with UAE, which isn’t in the habit of troubling the World Cup.”

Easy to do business with

“Out of the teams competing, only Chile and Korea are potential export markets that make it into the top ten in the World Bank’s Ease of Doing Business Index. Of the rest: Algeria and Argentina are propping up the table; Cameroon, Nigeria and Brazil are battling relegation and Colombia only just scrapes into mid-table.”

“Korea takes second place when we look at export attractiveness. It is a fast-growing economy that is already well-off and with which it is relatively easy to do business. Brazil comes third: what the host nation buys is compatible with what the UK makes and although growth is set to slow from recent rates it will be strong compared with many other countries. Finally, Mexico sits fifth: its greatest virtue is that it buys what the UK makes. It is also set to grow at around 7%y/y over the next five years.”

“When it comes to exporting, size matters. A market might be attractive but, if the market is small, the costs of attempting to enter it might be high relative to the expected benefits. In contrast, a large market will typically have more potential buyers. China is the undisputed world champion in this respect. It is very large and, despite some clouds on the horizon, is likely to grow strongly. Its large and growing middle class provides an attractive market for exporters. As it expands, China will become increasingly compatible with the UK’s exports.”

“World Cup contenders that combine attractiveness with size are Korea, Brazil and Mexico.”

Once our fictional “World Cup of Export” is played out it’s clear that Germany is a country that is as attractive to trade with as it’s football team is on the pitch. The Germans match their Brazil 2014 performance by reaching a final with the USA. Almost inevitably, however, it is the USA that wins the overall prize 2 to 1 with a near perfect mix of compatibility, growth prospects and ease to do business with.

Stephen Boyle concludes: “To borrow from the large catalogue of footballing clichés, the US and Germany make the final because they do the simple things well. They're defensively solid, with growth prospects offering stability over flamboyance. Yet they also allow for open, fluid play. And they stick to the rules. There’ll be few professional fouls and less biting.

In other words, Germany and the US offer UK exporters trading opportunities with minimal political, regulatory and economic risk. They encourage trade and want the type of goods the UK can provide. Yet just as this World Cup has shown that less established teams can give the favourites a run for their money, so newer export markets are likely to perform even better in four years time.”