As excited eyes turn towards the World Cup in Brazil, all the action last week was in Frankfurt, home of the European Central Bank. It tried again to accelerate growth and boost inflation. Economics Weekly looks at what will happen if the ECB’s plan fails and how UK firms are continuing to perform well. 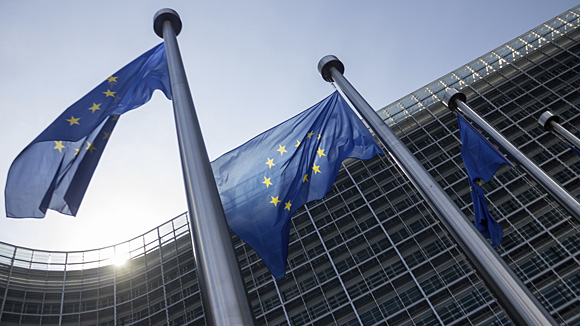 The Berlaymont building, Brussels, headquarters of the European Commission

The Eurozone economy faces three, related pressures. Growth was just 0.2% in Q1 2014, unemployment is 11.7% and inflation is low, dropping to 0.5%y/y in May. Last week, the European Central Bank (ECB) lowered interest rates and, to encourage lending, started charging banks to deposit money at the ECB. That’s the stick. The carrot is cheap loans to banks, a sort of Eurozone Funding for Lending Scheme.

President of the ECB Mario Draghi also warned "we are not finished". This is more than a hint, if not quite a promise, that the central bank may soon start its own QE programme. Markets rejoiced. Just as the US Fed pulls back from its quantitative easing, the ECB stands ready to step in.

The three UK Purchasing Managers Index (PMI) surveys posted solid results. Despite dropping slightly in May to 57, the reading for manufacturing was one of the highest ever. Output, new orders, employment levels and profitability are all on the up. In services, buoyant conditions have encouraged firms to take on additional workers. The employment index was pretty punchy in construction, which also reported another increase in output and new orders. All of this will give the Monetary Policy Committee food for thought. But it voted again for no change at its June meeting.

Households are rediscovering the joy of credit. Credit card borrowing has been growing since July last year and was up 3.2%y/y in April. Personal lending, which includes personal loans and hire purchase, is also up, by 2.3%y/y. Recent retail sales figures have shown that shoppers have their mojo back. So credit is helping the high street. But if pay growth remains weak then the recent surge in spending might well be on borrowed time.

The case of the missing exports

Optimism in manufacturing might make you believe that UK exports are booming and the economy rebalancing. Alas, another month of trade statistics suggests otherwise. Even taking into account a £700m omission of oil exports identified by HMRC, spotted too late to be incorporated into the official figures, goods exports fell between March and April. Meanwhile goods imports rose.

The Institute of Supply Management’s (ISM) surveys suggest US growth accelerated last month, with both the services and manufacturing readings ticking-up, and orders growing faster than in April. This chimes with the Fed’s Beige Book, which reported continuing growth. One thing to keep an eye on, however: the ISM says inflation is rising. Official inflation indicators remain subdued but a few more months of this from the ISM and the Fed would take notice.

US employment increased by 217,000 in May and unemployment held steady at 6.3%. More people are working in the US than at any time in the nation’s history, which is cause for some kind of celebration. But let’s not get carried away. Back in December 2007, when the recession started, 62.7% of Americans were in work. Today that ratio is 58.9%. Getting back to par would need another nine million jobs. America has made progress but has some way still to go.

Last week we highlighted threats to China's growth, an issue that stems from over-investment. In World Cup hosts Brazil, the opposite is true. The country has failed consistently to deliver sufficiently high investment. Consequently, it suffers from poor infrastructure. And although it is one of the world's largest exporters of raw materials and food, its economy is relatively closed from the outside world, which has led to a dwindling of Brazil's economic fortunes in recent years. Indeed, the UK is forecast to be the faster growing economy both this year and next. Which would you prefer: World Cup victory or faster economic growth?