Ryder Cup Europe and Royal Bank of Scotland have unveiled the design for the world’s first ever commemorative Ryder Cup bank note. 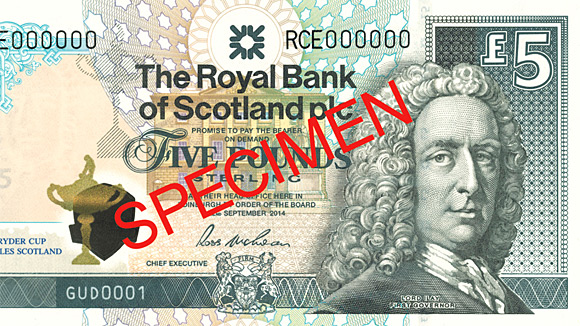 The Ryder Cup note will be the first to contain the signature of CEO Ross McEwan, making it highly collectable for enthusiasts

The special edition £5 note, which can be used as normal currency anywhere in the UK, is highly unique in that it will be printed on Hybrid paper – a first for the UK and Europe.

The mix of traditional cotton paper and polyester plastic materials will make the note more durable and resistant to tears or staining. Its design includes a see-through window in the shape of The Ryder Cup: a window feature on Hybrid banknote paper is also a European first.

The bank note comes in official Ryder Cup commemorative display packaging, and represents a proud host-nation tribute to one of the world’s most prestigious golf competitions.

The Ryder Cup banknote will also be the first to contain the signature of RBS Chief Executive, Ross McEwan, making it highly collectable for bank note enthusiasts.

Richard Hills, Europe’s Ryder Cup Director, said: “Bank notes are part of a stable of collectible items that people love to buy, or give as a gift, to commemorate major events. Sporting events don’t come much bigger than The Ryder Cup and we know that many people will want that special memento to mark the time it came to Scotland.

“It’ll make a great gift for someone – particularly ticket holders, for whom there is a space within the folio package for their ticket to sit on display, too.”

The bank note was designed and developed by Royal Bank of Scotland as part of the bank’s ongoing commitment to Scottish golf. The first notes are already being printed by specialist German firm Giesecke & Devrient, and the official commemorative packages are ready for pre-order via the Ryder Cup website at £20. 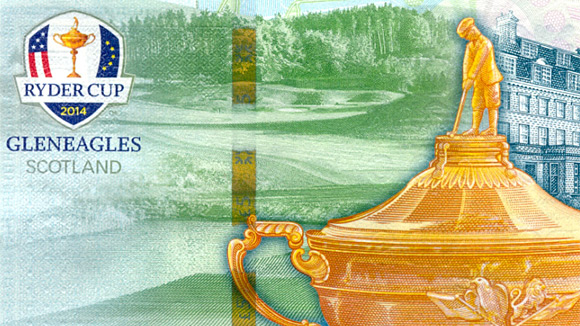 Although the notes are legal currency, they will not be in general circulation.

Ken Barclay, RBS’ Chairman in Scotland said: "RBS has a long history of issuing commemorative bank notes and supporting golf in Scotland and it means a lot to be able to mark The Ryder Cup's arrival here for the first time in over 40 years.

“Golf contributes in so many ways to Scotland's economy and wider communities, and we are proud to show our support through the launch of this note. RBS supports golf clubs all over Scotland and we are also committed to ClubGolf, the Ryder Cup legacy programme, which has enjoyed phenomenal success with over 300,000 children introduced to golf since the launch in 2003."

The Ryder Cup Commemorative Keepsake Folio is available for pre-ordering now. It will be sold via the Ryder Cup website and at the merchandise pavilion during the event at Gleneagles from September 23 - 28, 2014.