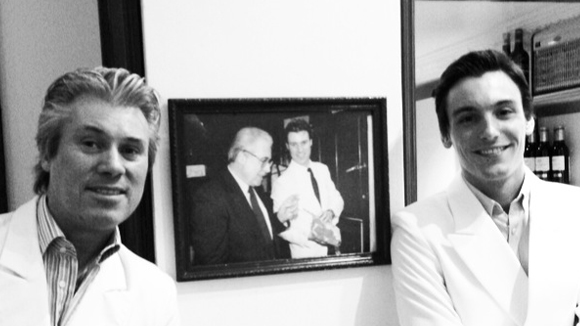 The original Les Gourmets des Ternes restaurant was opened in 1962 in the 8th District of Paris by Francis Marie.

Maximilien grew up in his grandfather’s restaurant and headed there every day after school to help out.  Les Gourmets des Ternes is one of Paris’s most sought-after restaurants and is a favourite with many celebrities including Sharon Stone and Jack Nicholson. When the family decided the time was right to bring the brand to London, Maximilien approached Darren Butcher, Relationship Manager at NatWest.

Together, they secured funding of £64,000 as part of the bank’s participation in the government’s Funding for Lending Scheme with backing from the Enterprise Finance Guarantee (EFG), which allowed Maximilien to kit out the restaurant and pay for a new interior.

Darren Butcher of NatWest said: “The restaurant is renowned for its bistro cuisine and in particular for the high quality of its meat. The London restaurant is adopting a similar ethos to the one in Paris and will be importing its meat from France. We could see that Maximilien had a passion for French food and was able to bring the family’s unique gourmet touch to London. We wish him the very best with his endeavour.”

Maximilien added: “Our business is unique thanks to the quality of our food and the main focus is our knowledge of meat. Darren Butcher, our relationship manager, really understood what we wanted to achieve. He was very helpful and gave us great advice.”

The restaurant opened with four employees and already that number has increased to five with an additional employee being taken on in the near future. Maximilien has developed an ambitious but realistic business plan which targets a turnover of around £400,000 in the first year of business. If all goes to plan, a second fifty-cover London restaurant is planned for 2015.

Describing his future plans, Maximilien said: “My vision is to do well with the first restaurant and then to open a flagship restaurant in London in somewhere like High Street Kensington or possibly Mayfair.”

Maximilien is also planning to branch out in other business areas and is considering establishing a delicatessen offering fine French food.