The long-term working relationship between a NatWest private client manager and a film industry client has resulted in a truly out of this world success story. 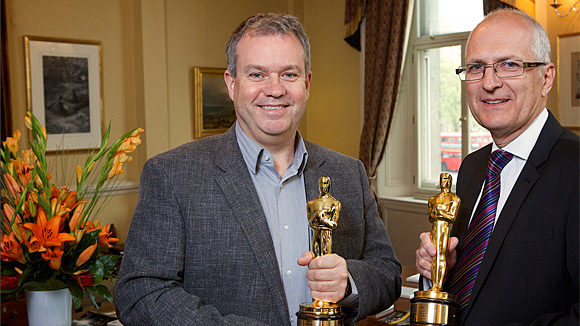 If you’ve seen Gravity, the Oscar-winning space odyssey that took cinemas by storm last year, you’ll know that – aside from stars Sandra Bullock and George Clooney – it was the movie’s ground-breaking visual effects that stole the show.

Neil Corbould, one of the film industry’s top special effects gurus, was part of the team behind Gravity’s mind-blowing recreation of zero gravity. Earlier this year he stepped on stage to accept an Oscar for the film’s Visual Effects. Neil also happens to be a long-standing customer of NatWest.

Neil’s finances are looked after by Senior Private Client Manager David Eldred. Over 20 years their strong working relationship has evolved into genuine friendship..

“The bank wants us to be trusted advisors, and I hope I fill that role. The friendship Neil and I have is now the bedrock of our good business relationship,” Says David.

David first started looking after Neil’s accounts at around the time he won his first BAFTA, for 1997’s sci-fi action romp The Fifth Element. Since then, he’s seen his client go from strength to strength, working on bigger productions and winning more awards and acclaim in the process.

“It’s been nice to watch his career develop,” says David. “I’ve been to some of Neil’s industry events, and he introduces me as his friend rather than his bank manager, which I take as a big compliment.”

After  Neil collected the Oscar for Gravity, the bank helped him celebrate the win by holding a special gathering at the Drummonds branch in London (pictured). Film industry colleagues, some of the bank’s own clients and, of course, David, came together to recognise everyone who had supported the film.

Neil even brought the award over to David’s house for dinner, much to the delight of his family.

“It was sat in my kitchen for a while, which was quite special,” David says.

Neil sees a direct link between the success of his own business, Neil Corbould Special Effects, and the bank’s long-term support.

“I’ve built this company up over many years with the help of the bank,” Neil explains. “They’ve been right behind me all the way, from the tricky times at the beginning up to now.”

The transfer of payments in the film industry can be infamously slow, placing businesses under pressure when bills are due. But Neil says the bank has always understood and made allowance for this.

“David’s been an integral part of that. He gets our business and the way it works - that’s rare in itself and makes a real difference.”

Neil believes that the support of David and NatWest has helped him take his special effects mastery into the Oscar spotlight and movie history..