A butcher’s shop which has been in business for nearly 40 years has helped secure its future thanks to NatWest. 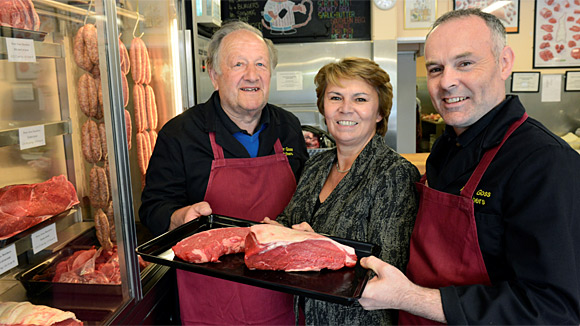 Peter Goss Butchers has been trading from the same premises in Bicester since it first started.

But when garages and land behind the shop were put up for sale the butcher’s owners, Peter Goss and Dale Grant, were concerned that they might have to move. They had been renting the garages for storage for non-perishable goods and for bins which have to be a minimum distance away from the shop.

“A lot of people were interested in the garages and land for development,” said Grant. “That would probably have jeopardised our business because we wouldn’t have been able to run from here without our storage space.

Goss and Grant spoke to their NatWest relationship manager, Clare Culkin, who helped them to secure borrowing to buy the garages and land.

“I went to Clare with my concerns and she said not to worry and that she would sort something out,” said Grant. “Within two to three days she had come back to say there was no problem. It was made very easy – Clare said ‘Leave it with me and I’ll point you in the right direction’.

“Within two weeks it was finalised and meant we knew we could continue trading from the shop. The business was built here, everyone knows we are here and it would have been like starting afresh if we had needed to move.”

Grant started work at the butcher’s shop 30 years ago when, aged 14, he accompanied Goss on rounds after school and at weekends. He joined the business full-time on his 16th birthday and he and Peter went into partnership five years ago.

Culkin said: “I am delighted that NatWest has been able to support these valued customers. I have known Peter and Dale for ten years, and after trading for 40 years it would have been a sad day if they were unable to continue to trade from their premises. The quality of their produce is fantastic and they go the extra mile to help their customers and give a very good service.”