A residential development which burned to the ground just weeks before completion last summer is about to welcome its new owners. 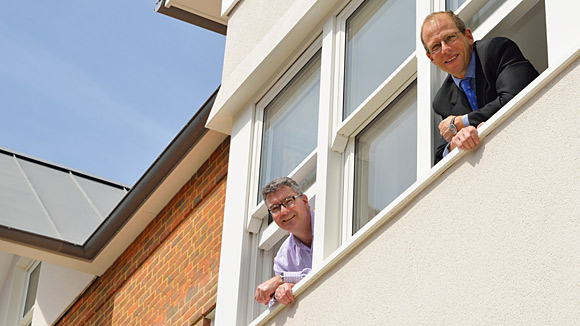 Symonds View, in Winchester, was about four weeks away from being finished when an arson attack destroyed it last August. Ten families living in the road were forced to evacuate their homes in the early hours by the ferocity of the blaze.

Now the house and three apartments, built by high-end residential property developer Millgate (Winchester) Limited, have been completed and sold.

The company had borrowed £850,000 from NatWest for the acquisition of the Hatherley Road site and development costs relating to construction of the three flats and a four-bedroom house.

NatWest relationship manager Mark Le Gassick worked with Millgate to ensure the loan was still available despite the delay caused by the fire.

Millgate director Robert Carter, who was on holiday in France when he learned of the fire, said: “NatWest has been absolutely fantastic and Mark has been superb. He has been so supportive in what was an incredibly traumatic time.

“I came back from holiday to invoices for about £150,000 on my desk, and a destroyed building site. If I had a bank manager who panicked and closed down on me it potentially could have shut down the business. Mark and NatWest didn’t panic; they extended the loan to allow us to rebuild. My team has built this development twice within a year – they have done a fantastic job.”

Carter added that the arson attack had led to Millgate creating a new job.

“One silver lining of the fire was that the business recruited its fifth member of staff, and he has been absolutely brilliant,” he said. “We normally just do one site at a time but last August we had already started on our next site. So I had to recruit another site agent.”

Le Gassick said: “I was on holiday last summer when Robert emailed me to tell me what had happened to the site. NatWest wanted to do all we could to make sure Millgate was supported as it demolished and rebuilt the site, and so we assured Robert that the funding would still be available.

“I made monthly site visits to monitor progress and I have been so impressed with how hard the team has worked to complete this development. It’s great now to see it ready to be handed over to its new owners, some of whom have patiently waited a lot longer than they thought they would have to before getting the keys to their new home. Robert and I are looking forward to the company’s next scheme being less traumatic.”