UK economic indicators are in spring flower. Blossoming activity and sentiment combined with the belief that a rise in official interest rates remains a shadow on the horizon are helping produce a feel-good factor across Britain. Yet like past years, the fortunes for 2014 may be decided by events away from home. 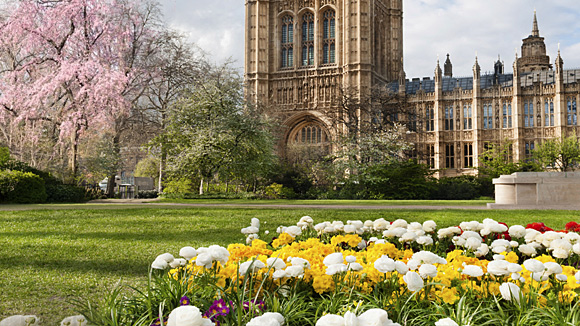 The IMF expects the UK to be the fastest growing developed economy in 2014. Output is forecast to expand by 2.9% this year, ahead of the US at 2.8%, Canada at 2.3% and Germany at 1.7%. Despite highlighting the UK’s overreliance on consumer spending, the IMF’s optimistic assessment of the UK economy stands in contrast to their view 12 months ago, when it pointedly argued the Government’s austerity measures were “playing with fire” on jobs and the economy.

And what a difference a year has made for Britain’s oft-embattled manufacturers. Output in the sector rose by a 3.8%y/y in February, the strongest annual rise in two years. It bodes well for exports and the desired rebalancing of the UK economy. Seemingly right on cue, the UK's trade deficit almost halved in the three months to February, compared with the previous three months. Alas, the declining trade deficit was due to imports falling more than exports, rather than exports rising. But with a fair wind, exports may soon be on the up.

Business profitability rose in the final quarter of 2013. Companies made just shy of 12 pence of profit for every £1 of capital employed. And confidence is high according to Deloitte's quarterly survey of CFOs. Over seven in ten think now is a good time to take on risk and a whopping 95% reported an improvement in prospects for economic activity over the past six months. So plans for investment, hiring and discretionary spending are at three-and-a-half year highs.

Conversely, UK construction suffered from a surfeit of wind (and rain) in February, which helped drag output in the sector down by 2.8%m/m. The house building sector was the hardest hit. Yet despite the weather-induced slump, underlying momentum remains positive. Private new housing construction was still 15.3% higher compared with February last year. This support should lay the foundation for a March bounce-back.

The latest survey from the Royal Institution for Chartered Surveyors suggests several more months of robust house price rises. Slightly more surveyors reported rising prices in March compared with February, with London and the South East still ahead of the rest. Although expectations of near-term price increases have lessened since the start of the year, agents and surveyors now expect prices to rise by an average by 6% a year over each of the next five years.

Could household finances finally be free from the big squeeze? According to the British Retail Consortium, UK shop prices fell by 1.7%y/y in March, the steepest decline on record. This makes it more likely that the official figures released this week will show the annual inflation rate falling below February’s 1.7%. So, after almost six consecutive years, March may be the month when average wages rise faster than average prices.

A long way left to run

There was no change from the Monetary Policy Committee in April, but we knew that in advance. Unemployment is still above 7%, which means forward guidance v1 is still operational, so a rate hike was a non-starter. Minutes from the US Federal Reserve’s March meeting shows the committee believes that economic conditions may warrant keeping the official interest rate below 4% even when the economy is back to normal. Like the Bank of England, the Fed feels a low rate environment has many years left to run.

How should we measure the UK's economic recovery? Based on economic output, the UK economy is still more than 1% below its 2007 peak. And this doesn't take account of population growth. Add that in, and we’re 6% poorer on average. Yet we all use public services. If you include the value of services such as schools, the NHS, free bus passes and the like then the average income per household is just 2% worse than it was in 2007. Which figure is correct? Each one and none. Every measure tries to capture something slightly different.