A team of RBS specialists has helped a customer salvage thousands of pounds, in burnt banknotes, following a devastating house fire. 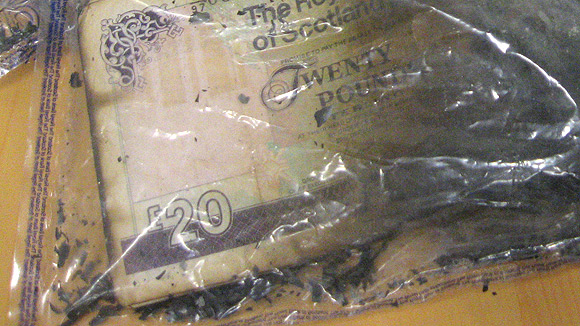 The customer received around £17,000 after his son returned burnt RBS banknotes, taken from a safe in the house, to the local RBS branch in Scotland.

“The family is well known in the branch and the customer had been removing cash for a while because he wanted to keep it at home in his safe,” said the local branch manager. “A lot of the notes had our bandings but we needed to be sure they were genuine and also act quickly because the customer’s house had been all but destroyed.”

The branch manager called the Scottish Note Team at the Edinburgh-based Cash and Coin operation. One of RBS’s experts on mutilated banknotes explained how to determine if a note is genuine, and the branch manager was then able to exchange the damaged notes for new tender.

The customer’s son then returned with even more banknotes which were very badly damaged. This final batch needed special tests to confirm they were genuine RBS notes.

The Scottish Note Team maintains a register to determine if anyone else has attempted to claim against the same serial number, which is printed twice on the front of each banknote with the exception of some commemorative notes that only have one serial number. The team received more than 250 claims against mutilated banknotes last year ranging from fire and chemical damage to tears caused by pets.

The branch manager said: “This was an exceptional circumstance and we all knew we had to do what was best for the customer and get a resolution quickly.”

(Names and location have been omitted to protect the identity of the customer.)