An East Anglian quail farming business has expanded with funding from NatWest. 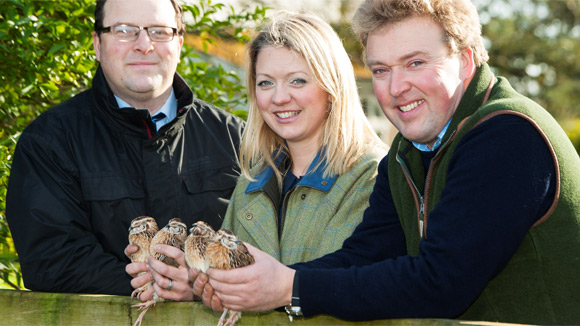 Norfolk Quail (norfolkquail.co.uk) has produced quail eggs and meat  from one of very few ‘free to fly’ quail flocks in the UK for two and a half years at Highfield Farm near Fakenham.

Founders John and Ellie Savory used a NatWest loan backed by the government’s Funding for Lending Scheme to supplement a Rural Economy Grant from the Rural Development Programme for England to convert part of their grain store into a processing plant. The plant will enable the business to supply its produce throughout the UK.

Ellie said: “We wanted to produce quail meat for a number of reasons, not least because 'free to fly' quail meat was undiscovered in Britain. But by farming for quail eggs and meat we are able to reduce waste as both cocks and hens are used, just part of our 'ethical farming' mantra."

The Savorys, who both have farming backgrounds, launched Norfolk Quail in 2011. They have a Clarence Court contract for the provision of their free to fly quail eggs, and the business supplies produce to leading local restaurants, including Morston Hall and Titchwell Manor on the Norfolk coast, Roger Hickman’s in Norwich, and both Michelin starred restaurants in Cambridge, Alimentum and Midsummer House..

But the expansion will enable Norfolk Quail to supply restaurants across Great Britain. The Savorys also aim to increase their workforce, with up to five new positions in the coming year.

Stuart Baxter, agriculture relationship manager for NatWest, added: “John and Ellie are driven to provide the highest quality products and have such a unique offering. It is a pleasure to have been able to give them the support they needed to take their business to the next level.”