A mother who qualified as a fitness instructor and developed a parent and toddlers’ exercise class to help combat her own depression has won the RBS Enterprise Award. 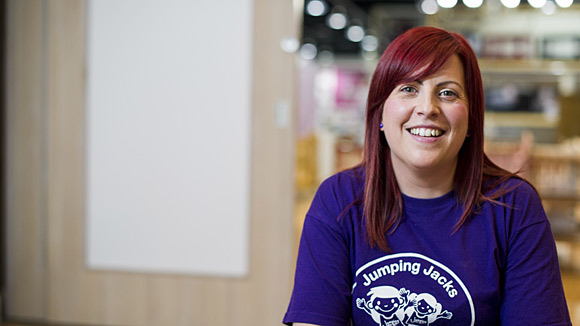 When Lucie Campbell’s doctor suggested she join a gym after she was diagnosed with post natal depression, she trained and qualified as a fitness instructor and sports leader. Then when her gym closed its crèche, she also piloted a class for parents and their young children.

Campbell approached The Prince’s Trust for the support she needed to develop the Jumping Jacks ABC class and has now taken the business into its fourth year of trading, employing two directors and four part-time staff.

Her success has been recognised with the RBS Enterprise Award, part of the Prince’s Trust and Samsung Celebrate Success Awards 2014.

Celebrate Success, which is in its tenth year, recognises the achievements of outstanding young people who have changed their lives for the better, and those who have helped play a part in supporting the work of The Prince’s Trust. The national awards are the climax of 11 regional and country heats, which have all been attended and judged by RBS representatives, and the winners of these regional heats are put forward for the final event.

RBS, which has worked with, and provided funding for, The Prince’s Trust for more than a decade, currently supports the Prince’s Trust Enterprise programme and sponsors the Enterprise Award. This honours young people who have overcome barriers and achieved success in creating a sustainable business or social enterprise.

Campbell said: “The Prince’s Trust allowed me to put my ideas into practice and gave me the knowledge I needed to take my ideas further than I’d ever imagined.

“I am a very positive person now. I believe in myself, my judgement and my ideas. I have achieved so much and feel that all of my hard work has really paid off. I wanted to give other parents the opportunity to exercise without the stresses of arranging childcare and I feel like I have achieved this. I could not have done it without The Trust’s support and I am truly thankful.”

The two other finalists have also made remarkable achievements in establishing their own businesses or developing plans in the face of adversity.

Claire Bradwell had been diagnosed with cancer before giving birth to her third child who had hip dysplasia, a malformation of the hip joint which requires an operation and hip spica cast to correct it.

She was recuperating from a hysterectomy and internal bleeding when she designed a special chair - the Hip Rocker - to help other children wearing a hip spica cast.

Bradwell attended the Enterprise programme and, guided by her business mentor, took the Hip Rocker to market with international success.

Chris Mullins was struggling with his sexuality when he fell into a deep depression, failed his studies and attempted suicide twice. Feeling isolated, depressed and unable to find work, Mullins looked into self-employment as a solution.

He attended the Enterprise programme and received the practical and financial backing he needed to open Evolution Man, a male-grooming salon. He has overcome a number of setbacks to make his business work, and Evolution Man is now a thriving enterprise.

Les Matheson, CEO of UK Retail at RBS, said: "The stories of the young finalists are incredibly inspirational and I would like to personally congratulate Lucie for winning.

“We are delighted to sponsor the RBS Enterprise Award which recognises young people who have overcome barriers and achieved success in creating a sustainable business. This is just one small way in which RBS can support developing businesses. I would like to wish Lucie the best of luck, on behalf of all at RBS."