Silver for 25. Gold for 50. The Bank of England’s Monetary Policy Committee (MPC) might last week have received a piece of construction timber. It is five years since Bank Rate was cut to 0.5%, where it remains and wood is the traditional fifth anniversary gift. 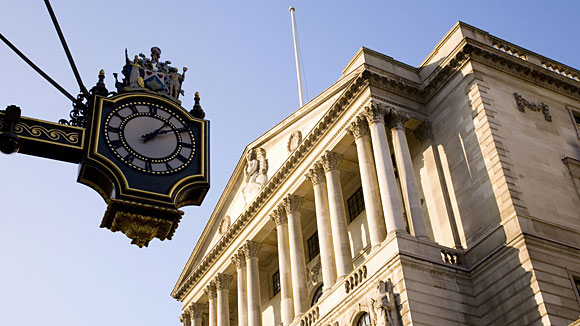 Five years of interest rates at 0.5%

With rising output and employment we would normally be looking out for signs of inflation at this stage in a recovery. But, outside the housing market, signs there are none. It’s an even money chance that the MPC will be picking up a lump of iron when the sixth anniversary comes round next March.

On 5 March 2009, the MPC cut Bank Rate to an all-time low of 0.5%. Back then, there weren't many people who thought rates would still be there five years later. But they are. Last week the MPC voted to leave rates on hold and quantitative easing unchanged. And markets think there's roughly a 50-50 chance they'll still be on hold when the MPC meets in March 2016. When it eventually comes, normalisation is unlikely to be a straightforward process. But it will hopefully be a welcome sign that our economy is on the mend.

The Purchasing Managers’ Indices (PMI) for services and manufacturing were broadly unchanged in February at levels in the mid-to-high 50s that signal decent growth. Most encouragingly there remain strong signs of rising employment. The jobs index across all sectors reached its highest level in the 15 year history of the series. With the construction PMI posting a strong number at 62.5 in February, the UK economy has made a very good start to the year.

House prices rose by 7.9%y/y in February, according to the Halifax, the fastest increase since October 2007. Average house prices are now to 4.8 times average earnings, almost the same as at the peak of the market in 1989. Further evidence that the housing market is alive and kicking came in the form of a 42%y/y increase in mortgage approvals. At its lowest point, approvals had fallen to 20% of the number at the peak in 2006. So it could be argued we are almost halfway there. But is the housing market recovering on a prayer?

According to the British Retail Consortium retail shop prices fell for the tenth consecutive month in February, by 1.4%y/y. That’s the longest period of falling prices since the series began in December 2006. Non-food prices fell 3.0%y/y, while food prices were 1.1%y/y higher. This is good news for wallets as falling prices boost spending power, but it means retailers have to fight hard to boost sales.

US labour market ploughs onwards, whatever the weather

The US economy created another 175,000 jobs in February, despite the wild weather that has been blamed for much of the recent disappointing data. The two million people who have found work in the last 12 months have pushed the unemployment rate down from 7.7% a year ago to February's 6.7%. The labour market is healing and this should make the Fed's next tapering decision a little easier. But it won't solve the problem of when to raise rates. On that topic, New York Fed President Dudley recently expressed a preference for moving the focus away from the unemployment rate towards a broader range of measures, much like the Bank of England has set out.

The ECB kept rates on hold at the record-low of 0.25%. President Draghi again said that rates may be cut if inflation declines from the current 0.8%, but claimed the euro zone doesn’t have a deflation problem. However, the ECB expects inflation to average 1% in 2014, well short of its ‘below but close 2%’ target and rising to 1.3% in 2015 and to 1.7% at the end of 2016. The problem is that domestic demand remains subdued in the monetary block as austerity continues to bite and unemployment remains at 12%.

...but some positive signs

In February, the euro zone grew at its fastest pace since mid-2011, the composite PMI rising from 52.9 to 53.3. Manufacturing led the way and services chipped-in too. Germany saw the fastest growth in the region, with recovery gaining traction in Italy and Spain. However, France continued to shrink.

Bank Rate has been at 0.5% for five years. Governor Carney has already said a rise is not imminent and that when rates start to rise, the pace will be slow. The MPC’s David Miles recently explained why he believes that rates are now permanently lower than they were before 2008. That could be the ‘new normal’.