Children in London’s state schools are being given the opportunity to learn how to programme computers, thanks to a volunteering project run by RBS. 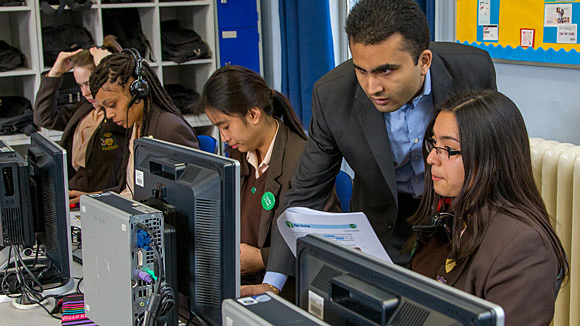 Using a stripped back, credit card sized computer called the Raspberry Pi, employees from RBS Markets and International Banking are running after school Raspberry Pi Clubs and IT classes to teach children that coding can be fun.

Simon Wawra, Delivery Manager in Markets and International Banking, co-ordinates the volunteers to run the practical programming clubs which have already taught dozens of students valuable skills in computing, electronics and science.

“It’s really opened up the minds of kids about what they can do with computers,” Wawra says.

“Kids of my generation used to dabble in programming quite a bit, but you’re almost discouraged from doing that nowadays with the way things are packaged up. Our recent understanding of computers is as black boxes – appliances rather than tools.”

To challenge this mindset, Wawra and his colleagues decided to approach schools directly to offer their help. The initiative is part of Markets and International Banking’s community programme, which supports a range of partner schools with staff visiting the schools regularly to support reading and numeracy schemes for younger children and CV workshops, mentoring and practice interview sessions for older students.

The Raspberry Pi team, which currently works with students from three London schools, and hopes to extend the scheme to a school in Delhi soon, aims to introduce programming and the role that technology plays in the world today. It also aims to broaden the students’ career horizons and encourage the participants to consider a career in technology. .

Anthony Smith, deputy head teacher at one of the partner schools, the Notre Dame Roman Catholic Girls’ School in Southwark, south London, says the scheme is a particular benefit to schools as focus increases on programming as part of the curriculum.

He adds: “The students are also learning to work in different ways, and with adults that they don’t actually know. It’s good practice for work experience, sixth form and university.”

The club also links with the Markets and International Banking equipment donation scheme which donates ICT equipment to partner charities, through which hundreds of Raspberry Pi computers and other items have been distributed.

Wawra says the club undertakes tasks that can be completed in a single session, and tries to keep things as fun as possible. Raspberry Pi includes a version of Snake, which readers may remember from old Nokia phones. Pupils learned how to tinker with the game’s mechanics, making changes before playing themselves.

Another session has involved hooking the Raspberry Pis up to LEDs to programme light patterns.

“We wanted to avoid any dry beginnings – the idea was to dazzle them with some exciting activities,” says Wawra.

“It has to be fun - we’re really trying to stimulate their interest rather than do their teacher’s job.”

On the day that I attend Raspberry Pi Club at Morpeth School in East London - a sunny Thursday afternoon when most people are making the most of the warmest weather of the year so far by heading to the parks - the students have turned up to learn how to calculate the value of Pi.

The four volunteers - Steve Read, Simon Pick, Celine Zhang and Robert Dixon – are helping the students program the computers to repeatedly but randomly scatter dots on a square within which a circle has been drawn. The computer must then count how many dots are within the circle and how many outside and the ratio between the two is multiplied by four to estimate Pi.

This technique is called the Monte Carlo method and is often used in banking to calculate risk.  It might sound a bit dry for students aged 11 upwards, but they take to it with huge  enthusiasm, and soon lines of numbers are whirring up on the screens.

As Wawra explains, several high-profile figures have argued the UK has a lack of graduates in ‘STEM’ subjects – science, technology, engineering and mathematics. The programming clubs he and his colleagues run are a direct attempt to address that issue.

“Through a creative approach and a bit of variety, we hope they’ll become more interested in computing or maybe even choose it as a path for their career,” he says. “The goal was to open their eyes and show them what’s possible.”

The plan seems to be working. Fred, a Year 8 pupil at Morpeth School, has not missed a single session of the after-school Raspberry Pi Club, and says he has added working in IT to the list of potential careers he might pursue later on.

Yann, another Morpeth School student, said he had been encouraged to start programming at home through the website Code Academy since attending the Raspberry Pi Club, while Winson said he was considering taking IT and Computer Science at A level.

One grateful parent has told the volunteers that she is also learning about programming, thanks to the Raspberry Pi club: her year 8 son is so enthusiastic about everything he learns each week that he is repeating the tasks with her when he gets home.

Alongside providing inspiration, the team plans to align the workshops with the national curriculum as much as possible as they roll them out to a greater number of local schools. This way students who have been coming to the club for some time can pick up knowledge that’s linked more directly to the syllabus.

By the end of the club, the students’ programming has generated some very close approximations to Pi. But more importantly they have really enjoyed themselves learning something which could change the course of their lives.

“Having somebody to stimulate your creativity at a young age is so important,” Wawra says. “That’s really what we want to do for these kids – give them an opportunity to express themselves and develop skills that could make a real difference in their future."

The hour has flown by and the students are reluctant to pack up. When Wawra tells Fred it’s the end of this week’s session, Fred says: “Oh bummer!”