There are tentative signs that the base of the recovery is broadening. Manufacturing output rose at the start of the year and shoppers closed their purses and wallets a little. Some of the steam might be easing output of the housing market. It’s still too soon to declare that we’re having a ‘Goldilocks recovery’ - not too hot, not too cold - but repeats of recent data would be welcome. 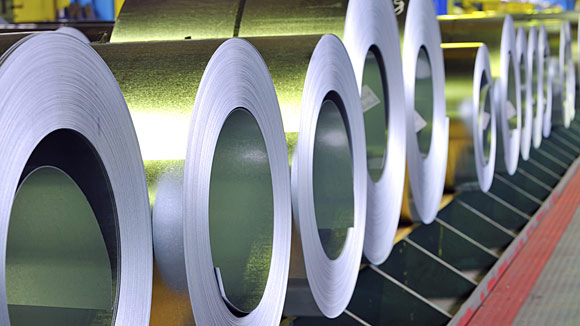 January manufacturing output was 3.3% higher than in 2013

UK manufacturers started the year as they left the last: with output on the way up. Following a 0.3%m/m rise in December, production rose 0.4%m/m in January. That puts it an impressive 3.3% higher than last year. Construction fared better still, with building up 1.8%m/m and 5.4%y/y. Its revival has been supported strongly by housing. But industrial and infrastructure construction are still struggling.

The British Retail Consortium reported shoppers taking it a bit easier on the wallet in February. The value of retail sales growth slowed to 0.7%y/y, from January's 5.4%y/y. The housing recovery was a boon with home accessories the top performing category, followed by furniture and flooring. Incomes remain under pressure, so some slow-down in growth was likely on the back of January's strong showing, which highlights the fragility of a consumer-led recovery.

The latest survey from the Royal Institute of Chartered Surveyors (RICS) suggests that the pace of house price growth is set to slow. The largest expected slowdowns are in London and the South East. RICS puts this down to an easing in pent-up demand, as reported increases in new buyer enquiries in February were one third of November’s level.

A bad start in Europe

Euro zone factory output declined by 0.2% in January but was up 1.2%y/y. Policy makers surely welcomed growth in peripheral economies like Spain and Italy, up by 0.2% and 1% respectively. But they will be worried about core countries like France – where production dropped by 0.3%m/m and for the second consecutive month – and above all the Netherlands where output fell heavily by 6.4%m/m in January, following a 2.1%m/m decline in December.

US retail sales rose 0.3%m/m in February, the first rise in three months. The rebound was broad-based with sporting goods stores and department stores both recording large monthly gains. However, some consumers may still be struggling with the bad weather as the category that includes online sales rose 1.2%m/m and 6.3%y/y. Of course, those figures may simply represent the continuing shift of many consumer purchases to the online world.

Have you noticed more opportunities to have your car washed by hand, rather than by those slightly terrifying automatic washers? The Office for National Statistics has added car washing by hand to the basket of goods and services used to calculate inflation. As shopping habits change so does the basket. DVD recorders have gone. In come internet streaming, flavoured milk and tubs of fresh fruit. On one level this is amusing. The serious side is that inflation influences interest rates. There's a link between what you pay for watching "Breaking Bad" and your mortgage payments.

Data released last week show that, across the UK regions, there are large differences in output per hour worked. Predictably, London was miles out in front. It was 33% more productive than the UK average in 2012, and a whopping 63% higher than Northern Ireland, which is the least productive part of the UK. But before we go over the top with praise for London, let's have some international perspective. It is only on a par with average productivity levels in France, Germany and the US. The debate about how to improve productivity is relevant for all parts of the UK.